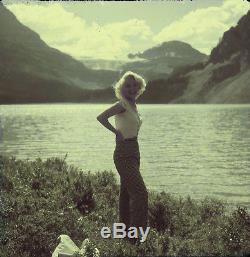 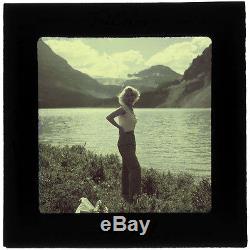 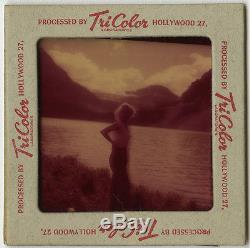 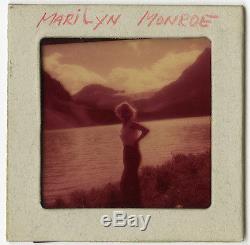 We are honored to be your one-stop, 5-star source for vintage pin up, pulp magazines, original illustration art, decorative collectibles and ephemera with a wide and always changed assortment of antique and vintage items from the Victorian, Art Nouveau, Art Deco, and Mid-Century Modern eras. All items are 100% guaranteed to be original, vintage, and as described. ITEM: This is a 1954 vintage and original color film camera transparency pin-up photograph of Marilyn Monroe.

A candid portrait of the iconic blonde bombshell taken during the filming of 20th Century-Fox's "River of No Return" in Alberta, Canada. This is truly a gorgeous view of the blonde bombshell posing along a lake with the mountains in the background. An uncommon Monroe collectible, this is the original camera film artifact in slide mount.

CONDITION: Fine condition with light storage wear. Probably the most celebrated of all actresses, Marilyn Monroe was born Norma Jeane Mortenson on June 1, 1926, in Los Angeles General Hospital. Prior to her birth, Marilyn's father bought a motorcycle and headed north to San Francisco, abandoning the family in Los Angeles. Marilyn grew up not knowing for sure who her father really was. Her mother, Gladys, had entered into several relationships, further confusing her daughter as to who it was who fathered her. Afterward, Gladys gave Norma Jeane (Marilyn) the name of Baker, a boyfriend she had before Mortenson. Poverty was a constant companion to Gladys and Norma. Gladys, who was extremely attractive and worked for RKO Studios as a filmcutter, suffered from mental illness and was in and out of mental institutions for the rest of her life, and because of that Norma Jeane spent time in foster homes. When she was nine, she was placed in an orphanage where she was to stay for the next two years. Upon being released from the orphanage, she went to yet another foster home. In 1942, at age 16, Norma Jeane married 21-year-old aircraft plant worker James Dougherty. The marriage only lasted four years, and they divorced in 1946. By this time, Marilyn began to model swimsuits and bleached her hair blonde.

Various shots made their way into the public eye, where some were eventually seen by RKO Pictures head Howard Hughes. He offered Marilyn a screen test, but an agent suggested that 20th Century-Fox would be the better choice for her, since it was a much bigger and more prestigious studio. Her first film was in 1947 with a bit part in The Shocking Miss Pilgrim (1947). Her next production was not much better, a bit in the eminently forgettable Scudda Hoo! Two of the three brief scenes in which she appeared wound up on the cutting room floor.

Later that same year, she was given a somewhat better role as Evie in Dangerous Years (1947). However, Fox declined to renew her contract, so she went back to modeling and acting school. Columbia Pictures then picked her up to play Peggy Martin in Ladies of the Chorus (1948), where she sang two numbers. Notices from the critics were favorable for her, if not the film, but Columbia dropped her. In 1949, she appeared in United Artists' Love Happy (1949).

It was also that same year she posed nude for the now famous calendar shot which was later to appear in Playboy magazine in 1953 and further boost her career. She would be the first centerfold in that magazine's long and illustrious history. The next year proved to be a good year for Marilyn. She appeared in five films, but the good news was that she received very good notices for her roles in two of them, The Asphalt Jungle (1950) from MGM and All About Eve (1950) from Fox.

Even though both roles were basically not much more than bit parts, movie fans remembered her ditzy but very sexy blonde performance. In 1951, Marilyn got a fairly sizable role in Love Nest (1951). The public was now getting to know her and liked what it saw.

She had an intoxicating quality of volcanic sexuality wrapped in an aura of almost childlike innocence. In 1952, Marilyn appeared in Don't Bother to Knock (1952), in which she played a somewhat mentally unbalanced babysitter.

Marilyn was now a genuine box-office drawing card. Later, she appeared with Betty Grable, Lauren Bacall and Rory Calhoun in How to Marry a Millionaire (1953). Although her co-stars got the rave reviews, it was the sight of Marilyn that really excited the audience, especially the male members.

On Thursday, January 14th, 1954, Marilyn wed DiMaggio, then proceeded to film There's No Business Like Show Business (1954). That was quickly followed by The Seven Year Itch (1955), which showcased her considerable comedic talent and contained what is arguably one of the most memorable moments in cinema history: Marilyn standing above a subway grating and the wind from a passing subway blowing her white dress up. By October 1954, Marilyn announced her divorce from DiMaggio.

The union lasted only eight months. In 1955, she was suspended by Fox for not reporting for work on How to Be Very, Very Popular (1955). It was her second suspension, the first being for not reporting for the production of The Girl in the Red Velvet Swing (1955). Both roles went to others. Her work was slowing down, due to her habit of being continually late to the set, her illnesses (whether real or imagined) and generally being unwilling to cooperate with her producers, directors, and fellow actors. However in Bus Stop (1956), Marilyn finally showed critics that she could play a straight dramatic role.

It was also the same year she married playwright, Arthur Miller (they divorced in 1960). In 1957, Marilyn flew to Britain to film The Prince and the Showgirl (1957) which proved less than impressive critically and financially.

The film was an absolute smash hit, with Curtis and Lemmon pretending to be females in an all-girl band, so they can get work. This was to be Marilyn's only film for the year. In 1960, Marilyn appeared in George Cukor's Let's Make Love (1960), with Tony Randall and Yves Montand. The following year, Marilyn made what was to be her final film. The Misfits (1961), which also proved to be the final film for the legendary Clark Gable, who died later that year of a heart attack. The film was popular with critics and the public alike. In 1962, Marilyn was chosen to star in Fox's Something's Got to Give (1962). Again, her absenteeism caused delay after delay in production, resulting in her being fired from the production in June of that year. It looked as though her career was finished. Studios just didn't want to take a chance on her because it would cost them thousands of dollars in delays.

She was only 36 years old. Marilyn made only 30 films in her lifetime, but her legendary status and mysticism will remain with film history forever. IMDb Mini Biography By: Denny Jackson.

The item "Marilyn Monroe River of No Return Vintage Original Camera Transparency Color NR" is in sale since Thursday, September 29, 2016. This item is in the category "Entertainment Memorabilia\Movie Memorabilia\Photographs\1950-59\Color".