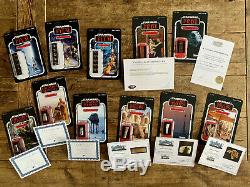 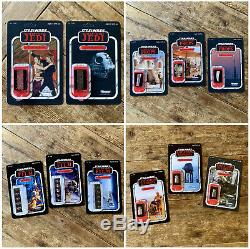 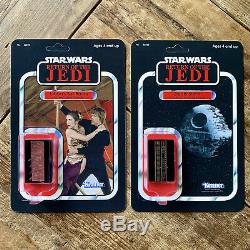 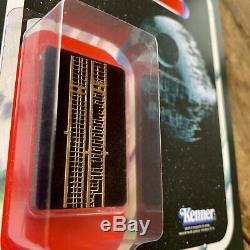 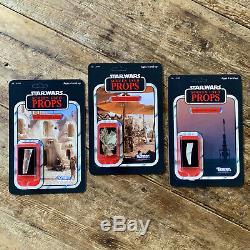 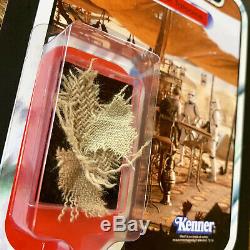 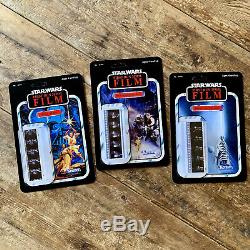 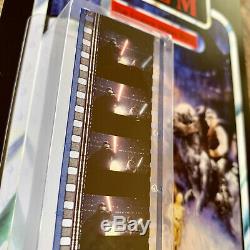 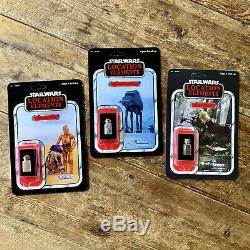 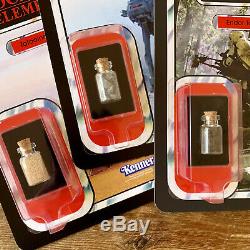 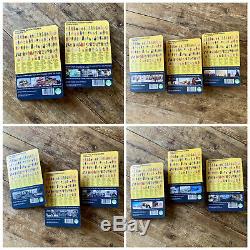 11 Rare Star Wars Props and Collectables Mounted on Custom Cardbacks. Vintage Kenner Mint on Card. Intricate acid-etched brass sections like this one were used to give the Death Star II model an under-construction look. This piece was pulled from the Industrial Light & Magic model shop nearly forty years ago. Jabba's Sail Barge Fabric.

This piece of screen-used canvas was part of the red sail that topped Jabba's iconic sail barge. It was recovered from Imperial Sand Dunes, California after filming was completed in 1982. Lengths of Mos Espa awning fabric were pulled from several Episode I film sets in Tunisia.

These textures and colors can be seen throughout the Skywalker Saga. These moisture vaporator fragments were screen-used in Episode II: Attack of the Clones. Slave Quarters Row is where Anakin Skywalker grew up. These screen-used Episode I sections were pulled from a Slave Quarter door frame after filming was completed. These film strips were cut from an original 1977. Theatrically released 35mm film reel. Film strips were cut from a 1997 theatrically released. This Dune Sea sand was collected from the filming location of the Battle at Sarlacc's Pit, Imperial Sand Dunes, California, May 2015. These Hoth rock fragments were collected from the Battle of Hoth filming locations around Finse, Norway, August 2009. This Endor topsoil was collected from the Speeder Bike chase filming locations, around the Smith River area, Del Norte, California, July 2013. The item "11 x Star Wars Custom MOCs Screen-Used Props + 35mm Film + Location Elements" is in sale since Friday, November 1, 2019. This item is in the category "Entertainment Memorabilia\Movie Memorabilia\Props\Originals".

The seller is "faraway_vintage_inc" and is located in Vancouver, British Columbia. This item can be shipped to United States, Canada.