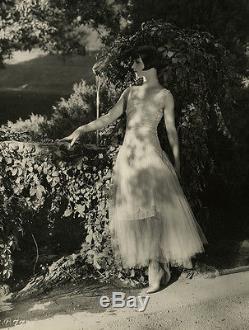 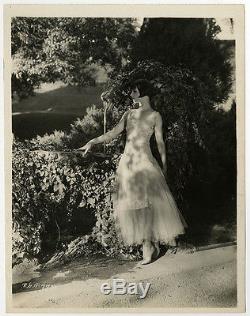 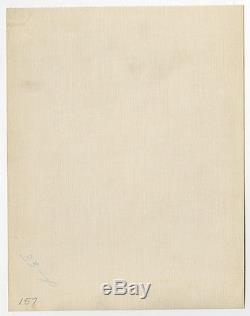 We are honored to be your one-stop, 5-star source for vintage pin up, pulp magazines, original illustration art, decorative collectibles and ephemera with a wide and always changed assortment of antique and vintage items from the Victorian, Art Nouveau, Art Deco, and Mid-Century Modern eras. All items are 100% guaranteed to be original, vintage, and as described. ITEM: No single person captures the spirit of the jazz age quite like Louise Brooks. A fashion, style, and cultural trend setter, Brooks found a place in every important part of roaring twenties culture; from the Lost Generation expatriate communities of Europe, to modern dance, to avant-garde and popular Hollywood silent film.

The iconic cult Hollywood star's enduring popularity and her scandalous and brief career in film mean that vintage original portraits of Brooks are hard to find. A classically beautiful LuLu photo, this vintage and original spectacularly rare key book still portrait captures Brooks, c. A glamorous view of the silent screen femme fatale in a tulle gown, photographed in profile to better show off her severe bobbed haircut. Standing at an ivy covered fountain in a sunny garden, Brooks is a magical and ethereal beauty. A rare and absolutely stunning Louise Brooks photograph. Measures 7 3/4" x 10" on a glossy paper stock with original keybook linen. Please use the included images as a conditional guide.

The daughter of a Kansas attorney, Louise Brooks was 15 when she accompanied her mother to New York. A talented if not inspired dancer, Brooks performed with the Denishawn dance troupe, then worked in such annual revues as George White's Scandals and The Ziegfeld Follies.

Signed to a Paramount film contract in 1925, she was largely confined to nondescript leading lady roles in such films as W. Fields' It's the Old Army Game (1926), directed by her then-husband Eddie Sutherland. Better roles came her way in Howard Hawks' A Girl in Every Port (1927) and William Wellman's Beggars of Life (1928). With her darkly exotic good looks and distinctively bobbed-and-banged haircut, Brooks gained popularity with filmgoers, but neither critics nor studio executives were particularly impressed with her acting ability.

All this changed when she was invited to work in Berlin by director G. Her haunting, provocative performances in Pabst's Pandora's Box (1928) and Diary of a Lost Girl (1929) not only established her as a screen personality of the first rank, but also fostered a Louise Brooks "cult" which continued to flourish. Alas, when the temperamental Brooks refused to return to Hollywood to film sound retakes for her silent picture The Canary Murder Case (1929), she was effectively blacklisted in Hollywood. Soon she was scrounging for work in two-reel comedies and bit roles; her last screen appearance was a demeaning leading lady assignment in the 1938 Three Mesquiteers Western, Overland Stage Raiders, which she accepted because she needed 300 dollars in a hurry. She spent the next two decades in virtual obscurity, occasionally obtaining radio work, but generally limited to clerical and salesgirl jobs.

She was rescued in the mid-'50s by a millionaire media executive with whom she'd allegedly had an affair, and who provided her with a modest monthly annuity for the rest of her life. She moved to Rochester where she formed a lasting friendship with film buff/curator James Card of the George Eastman House. It was Card who drew the reclusive Brooks out of her shell with a series of well-received Louise Brooks retrospectives. In her last two decades, she began a whole new career as a writer, producing well-researched and well-balanced articles on movie history. Still, she remained a mercurial personality to the end, alternately attracting and repelling her admirers with her unpredictable behavior.