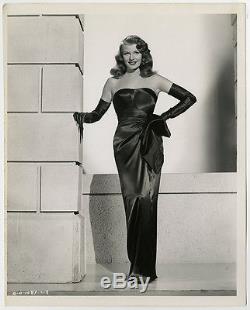 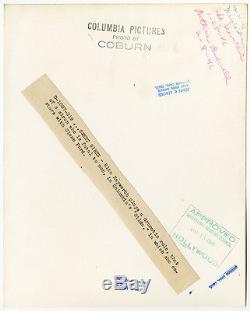 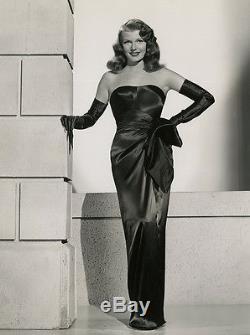 We are honored to be your one-stop, 5-star source for vintage pin up, pulp magazines, original illustration art, decorative collectibles and ephemera with a wide and always changing assortment of antique and vintage items from the Victorian, Art Nouveau, Art Deco; Mid-Century Modern eras. All items are 100% guaranteed to be original, vintage, and as described. ITEM: This is a vintage and original 1946 photograph of Rita Hayworth in costume from her signature role as Gilda, in her iconic curve hugging femme fatale gown.

This photoshoot with Robert Coburn set the tone for the entire advertising campaign and this sequence of images of Hayworth seen as a backlit temptress in the costume she wore for the "Put the Blame on Mame" sequence has become synonymous with the character, film, and even the star. Hayworth famously remarked about her troubles with men, They go to bed with Gilda, they wake up with me. " Measures 8" x 10 with margins on a glossy double weight paper stock. Various ink stamps, handwritten notations, and paper caption press snipe on verso. CONDITION: Fine+ condition with light corner wear.

Please use the included images as a conditional guide. Margarita Carmen Cansino was born on October 17, 1918, in Brooklyn, New York, into a family of dancers. Her father, Eduardo was a dancer as was his father before him. He emigrated from Spain in 1913.

Rita's mother met Eduardo in 1916 and were married the following year. Rita, herself, studied as a dancer in order to follow in her family's footsteps.

She joined her family on stage when she was eight years old when her family was filmed in a movie called La Fiesta (1926). It was her first film appearance, albeit an uncredited one. Rita was seen dancing by a 20th Century Fox executive and was impressed enough to offer her a contract. Rita's "second" debut was in the film Cruz Diablo (1934) at age 16.

The drought began between The Lady from Shanghai (1947) and Champagne Safari (1954). Then after Salome (1953), she was not seen again until Pal Joey (1957). Part of the reasons for the downward spiral was television, but also Rita had been replaced by the new star at Columbia, Kim Novak. After a few, rather forgettable films in the 1960s, her career was essentially over.

She was a dancer, a glamorous personality, and a sex symbol. These qualities are such that they can carry her no further professionally. Perhaps he was right but Hayworth fans would vehemently disagree with him. Rita, herself, said, "Every man I have known has fallen in love with Gilda and wakened with me". By 1980, Rita was hit with Alzheimer's Disease.

The item "1946 Iconic Rita Hayworth Film Noir Vixen Robert Coburn Vintage Gilda Photograph" is in sale since Thursday, March 03, 2016. This item is in the category "Entertainment Memorabilia\Movie Memorabilia\Photographs\1940-49\Black & White". The seller is "grapefruitmoongallery" and is located in Minneapolis, Minnesota. This item can be shipped worldwide.