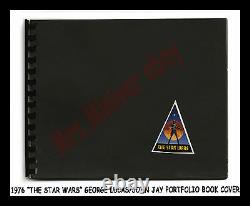 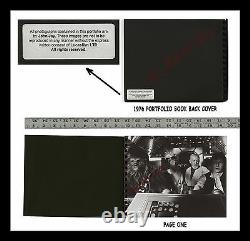 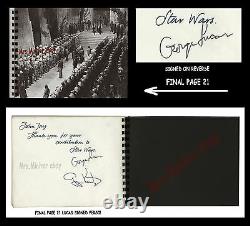 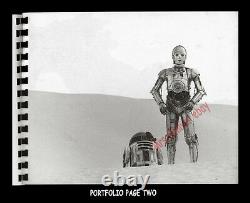 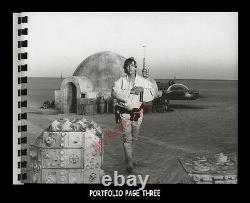 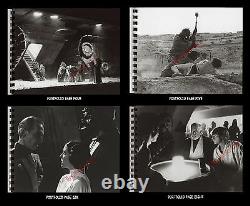 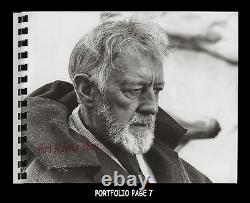 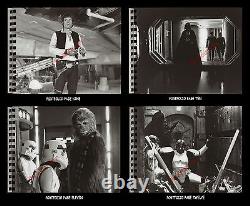 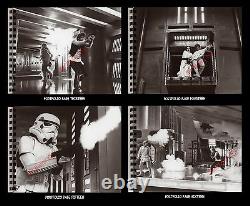 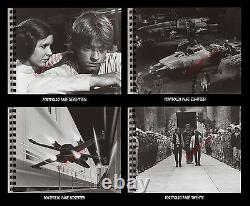 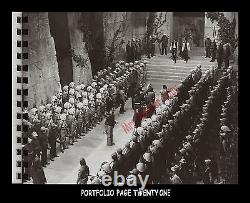 1-OF-A-KIND EARLY Star Wars HISTORY! AMAZING PRE-RELEASE lineage & FULLY RECORDED PROVENANCE! Up for sale is simply one of the greatest Star Wars items to ever hit the open market: An original 1976 STAR WARS Pre-Release GLORY BOOK with AMAZING lineage and provenance - INCLUDING - the fact that this was PERSONALLY OWNED BY George Lucas & HAND-SIGNED (PERFECTLY & LEGIBLY) by the CREATOR HIMSELF - back in 1976 no less! George Lucas assembled this aesthetically and historically significant 21-page portfolio of ultra high-quality production stills and gave it to his on-set still photographer, John Jay, back in July of 1976. This was shortly after the principle live-action filming of Star Wars was finally completed.

Back then, Lucas and the film were experiencing a plethora of problems, all of which had profoundly threatened the completion of the production. He was so relieved and thankful to get through all of the overseas mishaps that when he finally did return to the US he created this memento as a "thank you" gift to John Jay for his hard work on the film. Flash forward to 2007: For the 30th anniversary on Star Wars, the quintessential book accounting the entire history of George Lucas' signature creation was released. It meticulously chronicles every step in the journey on how he was able to put together his now legendary epic masterpiece. At the beginning of chapter 10, on page 218 Rinzler writes.

A shattered Lucas made a couple of stops before returning to California: Mobile, Alabama, to visit Spielberg on his set; and New York City to say hello to Brian De Palma. Lucas had assembled booklets of black-and-white production stills, on-set photography of Star Wars , which he gave to his friends, including film critic Jay Crocks. This is one of those books. Besides the obvious, what makes this particular book so wonderful is that it was gifted to John Jay, the original photographer who actually took all of the photos contained within it, and so it's THE ARTIST'S PERSONAL PORTFOLIO! The book is also HAND signed by George Lucas and Star Wars producer Gary Kurtz to Jay personally.

Most appropriately, and, very thoughtfully, the book was signed on the last page, which is the backside of the production still of George Lucas directing the finale of the movie. THE GEORGE LUCAS SIGNATURE IS AMAZING. If you're an autograph collector, then you know - It's nearly impossible to find a legible signature on Lucas. Almost 100% of all his autographs are what you'd have to describe as a mere "dismissive" squirrelly squiggle. This one certainly is not. It's actually as nice as it gets - VERY clear, legible , and easy to read. George really took his time with this one. He was signing it to a respected colleague who was also a friend, and so it mattered! This is an amazing item to own.

Again, this particular book, given to John Jay, is arguably the best of all the Glory Books. That's because it's also the artist's portfolio - which makes it a double whammy!

John Jay's more than fantastic work comprises the entire contents of this and ALL the other books that Lucas gifted out. The book consists of 21 photographs of extraordinary high quality and clarity. These are NOT studio dupes distributed for publicity purposes; these are actual prints off the camera negatives bound in a volume.

Additionally, as you can see from the photo, this portfolio has the ORIGINAL working title on the cover, " The Star Wars , " along with the now famous Ralph McQuarrie pre-production art of Luke Skywalker directly above it. Also chronicled on the same page [218] of Rinzler's The Making of Star Wars. Is an important clarification as to when the film's title changed. It mentions that it wasn't until on or about the same time as these books that "Lucas had dropped The from the title, at which point it became Star Wars " - Another golden nugget of information which coincides poignantly with this portfolio, making it even juicier. Notice on its final page (back of still 21), right above George Lucas' signature - The The in Star Wars has been dropped! This is quite the historic and early "Star Wars" memento. Actually, this might be the earliest Star Wars memento that was specifically designed to be a memento, if that makes sense. I think it did to Lucas when he gifted it out.

It was formerly given to the Archive by John Jay The back cover of the album contains a white 2-1/2 x 1 inch sticker reading: All photographs contained in this portfolio are by John Jay. These images are not to be reproduced in any manner without the express written consent of Lucasfilm LTD. It was originally a gift given to John Jay by George Lucas and Gary Kurtz in appreciation for his work on Star Wars. Only a handful of these exclusive albums were made.

This is as important and as rare as any piece of movie memorabilia ever gets. If you're looking for an investment/museum quality item.

Ben Obi-Wan Kenobi Anthony Daniels.... Darth Vader James Earl Jones.... It can crash regardless of any decision you make and can even crash regardless of any decision made by the company related to the stock - Leaving you with a near worthless piece of paper that won't inspire anyone! The magnificence of art and historic documents have an inherent value that relates to civilization and society. Please write with any questions.

If you're in the market for top quality original vintage movie posters or Star Wars, then please. The item "1976 George Lucas PERSONALLY OWNED and LEGIBLY HAND-SIGNED STAR WARS GLORY BOOK" is in sale since Tuesday, July 14, 2020.

This item is in the category "Entertainment Memorabilia\Movie Memorabilia\Posters\Originals-United States\1970-79".miniver" and is located in Studio City, California.