2003 Clapperboard For Lord Of The Rings Return Of The King J. R. R. Tolkien 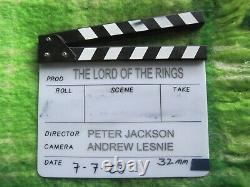 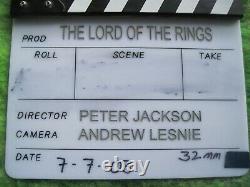 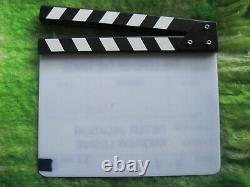 Original Clapperboard Used By the Film Crew of the Motion Picture - The Lord of the Rings - The Return of the King. An original camera clapperboard used in the creation of the classic final picture in the film trilogy adaptation of The Lord of the Rings - The Return of the King which eventually won the Academy Award for Best Picture. A clapperboard is a pair of hinged boards clapped together at the beginning of a film shot in order to aid sound synchronization and at the same time record the shot number and the number of individual takes of a scene. The board lists the production name, the directors name Peter Jackson, the cameramans name Andrew Lesnie, the scene number, the roll of film number, the take number and the date of shooting. 11 inches wide by 9 3/4 inches tall.

The item "2003 CLAPPERBOARD FOR LORD OF THE RINGS RETURN OF THE KING J. TOLKIEN" is in sale since Wednesday, August 5, 2020.

This item is in the category "Entertainment Memorabilia\Movie Memorabilia\Props\Originals". The seller is "catstarbuck" and is located in Santa Barbara, California.