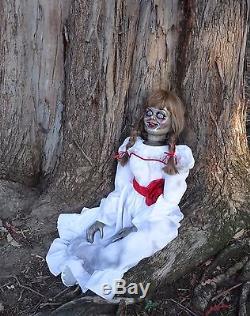 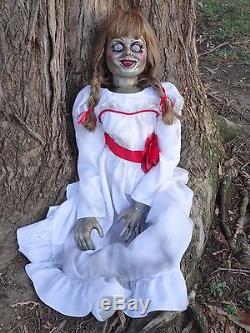 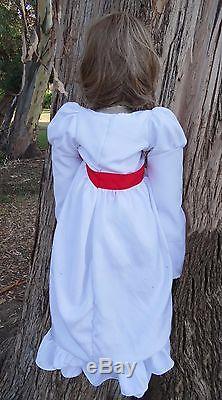 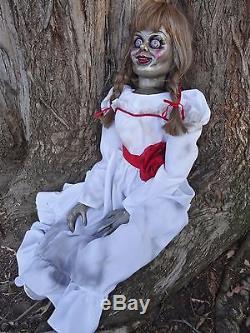 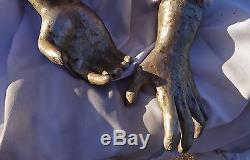 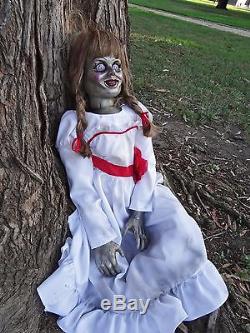 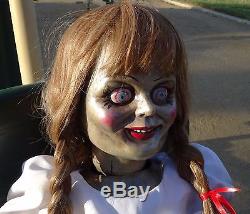 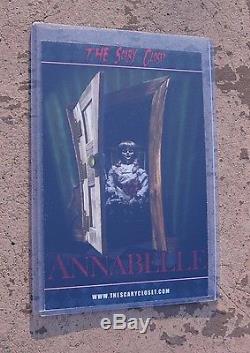 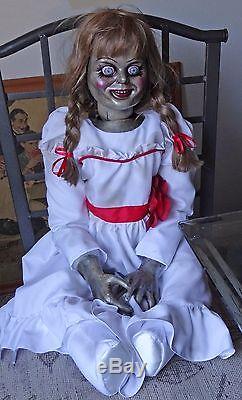 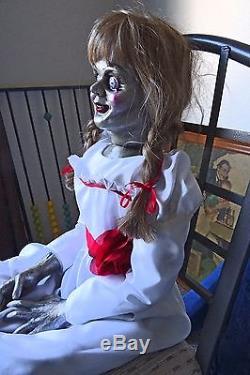 POSSESSED VARIANT PROTOTYPE - ARTIST PROOF EDITION.. What we have here is an extraordinary professionally made precise 1:1 Lifesize Prop Replica ANNABELLE made by a Hollywood movie special FX team. This puppet doll will make the creepiest gift and or display in your very own collection ever and just in time for ANNABELLE: CREATION on August 11. The Scary Closet is well known worldwide for its high-end quality FX Doll and puppet props from its "Nightmare Puppets Collection Limited Edition Series" and is the ONLY Haunted Doll maker to ever be visited on many occasions by the biggest horror movie director of modern times, Mr.

James Wan Director of The Conjuring 1 & 2 as well as Saw, INSIDIOUS and Dead Silence and now a very lucky VIP collector can take Annabelle home. When James Wan was asked what he thought of The Scary Closet's puppets he said: "YOUR PUPPETS ARE SPOT ON" -James Wan This special Haunted Annabelle prop doll consist of over 50 intricate pieces and by no means made like a cheap toy but is made to last for many years of haunted fun. Every stitch, every stroke of paint and every aspect of the aging process was meticulously hand-done. There is nothing like it anywhere in the world, unless you visit Ed and Lorraine Warren's museum and see the real thing.

The doll is approximately 37 inches from head to toe. The arms and legs can fold like a real dummy puppet. Over 100 close-up pictures from all angles were taken of the screen used Annabelle doll while it was on display in Burbank, California during a short time during the Warner Brothers Studio lot tour to bring you an exact version. The Haunted Annabelle Doll will come with a hand signed COA from The president of The Scary Closet. THIS IS A SPECIAL ARTIST PROOF OF THE POSSESSED VERSION : IT SAYS #1 ON IT..

The Scary Closet is famously known for their Limited Edition Nightmare Puppets Collection and their unique ability to capture the very essence of a prop doll or puppet. For those unsuspecting individuals, The Haunted Annabelle Doll is real...

One of the creepiest parts of the movie "The Conjuring" is the evil possessed doll Annabelle, who makes up the cornerstone of Ed and Lorraine Warren's spooky museum of trophies. Annabelle was the focus of a case that famed paranormal investigators Ed and Lorraine Warren took part in during the early 1970s and is highlighted in the book "The Demonologist" It has been stated that this is one of the most unusual cases of a possessed object on record. The doll was a present for her daughter Donna on her birthday. Donna, at the time, was a student in college, preparing to graduate with her nursing degree and resided in a tiny apartment with her roommate Angie (a nurse as well).

Pleased with the doll, Donna placed it on her bed as a decoration and didn't give it a second thought until a few days later. Within that time, both Donna and Angie noticed that there appeared to be something very strange and creepy about the doll. The doll apparently moved on its own, relatively unnoticeable movements at first, like a change in position, but as time passed the movement became more noticeable.

Donna and Angie would come home to find the doll in a completely different room from which they had left it. Sometimes the doll would be found crossed legged on the couch with its arms folded, other times it was found upright, standing on its feet, leaning against a chair in the dining room. Several times Donna, placing the doll on the couch before leaving for work, would return home to find the doll back in her room on the bed with the door closed. This paint variant is a huge request from collectors as it reflects the the most creepy moments as the doll comes to life through possession of the demon.

When someone enters the room you can bet they will be running for their life when they see this scary life like Annabelle. These have been great for Haunted Houses or private parties as well as high demand for quality VIP collectors. IN ANNABELLE CREATION RELEASING AUGUST 11: Former toy maker Sam Mullins and his wife Esther are happy to welcome a nun and six orphaned girls into their California farmhouse. Years earlier, the couple lost their 7-year-old daughter Annabelle in a tragic car accident. Terror soon strikes when one of the girls finds a seemingly innocent doll t.

Hat seems to have a life of its own. To view all our other spooky puppets & stuff for sale now.. FOR LOCAL PICK UPS, PAYMENTS MUST BE CASH.

WITH ANY AND ALL QUESTIONS. The item "ANNABELLE HAUNTED HALLOWEEN HORROR PUPPET DOLL CONJURING 2 JAMES WAN CREATION" is in sale since Sunday, July 30, 2017.