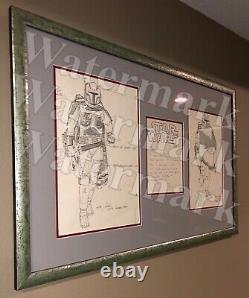 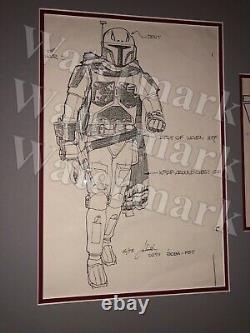 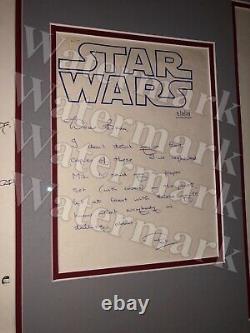 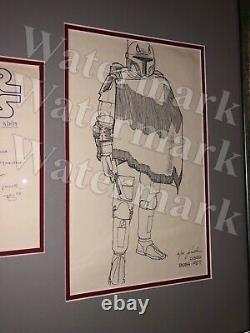 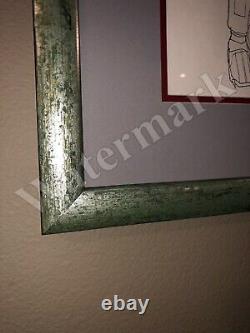 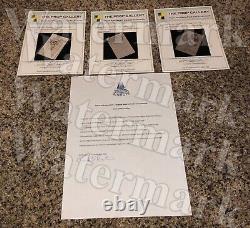 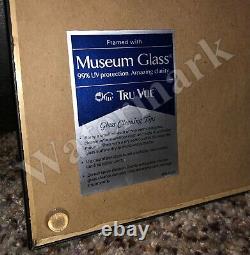 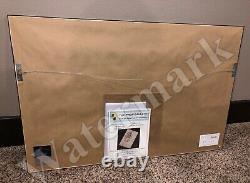 For sale is a professionally framed collection of items that came from Brian Johnson's production "bible" for The Empire Strikes Back, featuring two different copies of the proposed Boba Fett costume as well as a signed letter on official Star Wars letterhead that goes with them. Also on the back of the frame is the very solid provenance for the items.

It is a weathered/distressed green-metallic colored frame with steel blue and red double mats (to complement Fett's armor and costume), and finished with UV protected Museum Glass. On the back is a heavy duty wire for hanging as well as the pouch containing the certificates and letter of provenance. The three certificates are watermarked on certified heavy card stock from The Prop Gallery and detail each of the items. The two Boba Fett copies are directly from Joe Johnston's concept sketches (0299 and 0300) and these were distributed directly to Brian Johnson (special effects supervisor and winner of an Academy Award for work on ESB) where they were kept as part of his production reference "bible" during filming. The hand written letter on Star Wars letterhead, dated 8/8/78 is from Patricia Blau (production secretary for the film) and written to Brian Johnson.

It also mentions "Miki" in the letter, which is likely Miki Herman (who was the Production Coordinator on ESB). With the success of The Mandalorian and now with Boba Fett getting his own series on Disney+, one of the most mysterious characters that has always been a fan favorite is finally getting some long overdue limelight. The historical significance speaks for itself. I will obviously answer all questions that anyone has in greater detail.

The seller is "guinness4power" and is located in Cedar Rapids, Iowa. This item can be shipped worldwide.