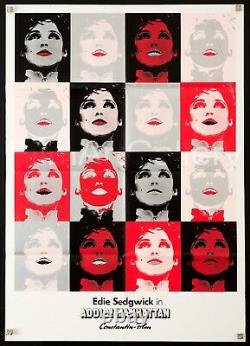 Rare, original first release German premiere litho poster for the 1972 film'Ciao! Manhattan', a quasi-documentary starring the beautiful but doomed Andy Warhol superstar Edie Sedgwick. Original release posters (with the exception of the regular style German poster - NOT THIS SPECIAL PREMIERE STYLE) for this cult classic are extremely difficult to find! The reason is that this film was barely distributed in most countries. It premiered in Amsterdam in July 1972 to critical acclaim.

However, its distribution was very spotty and it only played in a very few cinemas in some of cities in Germany & France, then a few more brief exclusive runs in a handful of cities in the USA: San Diego, New York, Denver and Tempe, Arizona, then a cinema in London in 1973 (when this poster was printed) and one in Canada. It never made it to most major cities during those years and specific posters had to be printed for each engagement.

As a result (besides the relatively common regular release German poster) there is a rare 1975 French poster; there was a 1972 San Diego poster and this one - but those are the only ones we have seen for the original release engagements. Very few people saw this film when it was first released, very few cinemas showed the film and very few posters were printed (and fewer still survived). But the poster here is original release.

Note that this beautiful poster is completely different than the common regular German release poster, which features an illustration. This poster was printed in a much smaller quantity and the very Warhol-esque repetition of the iconic Edie photo is extremely effective, especially in person, as the silver, black and reds in particular are vividly printed, and appear somewhat similar to a silkscreen in terms of the vibrancy.

Poster measures 23" x 33" inches and is in fine/very fine condition: folded as issued, it was never used and has only some creasing, minor fold and edge wear and a diagonal crease in the upper right corner image. NOTE: PLEASE IGNORE THE BLACK MAGNETS IN THE CORNERS: THEY ARE USED DURING THE PHOTOGRAPHIC PROCESS AND AREN'T PUSHPINS, HOLES OR A DESIGN ELEMENT. PLEASE SEE OUR OTHER AUCTIONS AND STORE ITEMS FOR COOL MOVIE POSTERS. It must come back in the same condition as it was sent. FILM/ART has one of the finest collections of original movie posters.

The item "CIAO MANHATTAN Original 1973 23x33 Edie Sedgwick Andy Warhol Film/Art Gallery" is in sale since Sunday, November 11, 2018. This item is in the category "Entertainment Memorabilia\Movie Memorabilia\Posters\Originals-International\1970-79". The seller is "filmartgallery" and is located in Los Angeles, California. This item can be shipped worldwide.