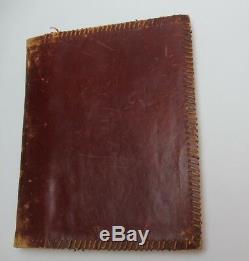 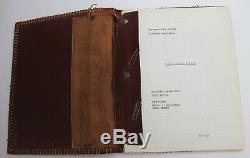 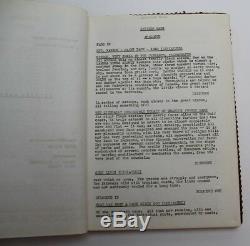 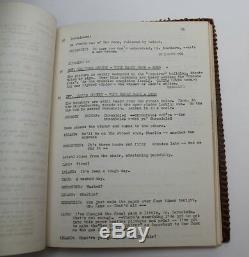 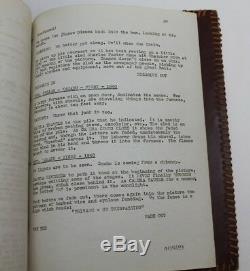 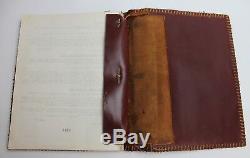 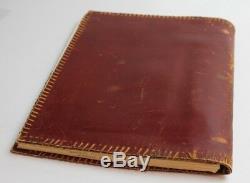 This is an Original Pre-production Movie Script from the 1941 film titled, "Citizen Kane". It has an old handmade stitched leather script cover on it.

On the inside of this leather front cover there is a name inscribed at the bottom, which is William Berke. However, there are no handwritten annotaions inside. I researched his name and I can not find his name in the credits of Citizen Kane, but he was involved in a lot of other films during the 1940's.

This is an undated Pre-production script used by Mercury Productions during the very early stages of Citizen Kane. This script has all white pages inside and it is 87 pages long. The first page inside and the outer edges of the script are stamped, University of St.

This script was used in their film Library many years ago. This Pre-production script is held inside of an.

Old handmade stitched leather script cover. Some of the leather stitching has broken but the cover is still in good overall condition for its age. Please view all of the pictures provided above. A group of reporters are trying to decipher the last word ever spoken by Charles Foster Kane, the millionaire newspaper tycoon: "Rosebud". The film begins with a news reel detailing Kane's life for the masses, and then from there, we are shown flashbacks from Kane's life.

As the reporters investigate further, the viewers see a display of a fascinating man's rise to fame, and how he eventually fell off the top of the world. Specializes in rare and collectible movie scripts.

Our scripts are genuine, authentic and screen used. We also carry movie props from no genre in particular. Furthermore, all of our items that are not props or scripts can be found in our Other Memorabilia category.

We do not sell reproductions or fakes. The item "Citizen Kane / Orson Welles 1941 Original Pre-production Movie Script Screenplay" is in sale since Tuesday, April 30, 2019. This item is in the category "Entertainment Memorabilia\Movie Memorabilia\Scripts\Originals\Unsigned".

The seller is "themoviewizard" and is located in Van Nuys, California. This item can be shipped to United States.