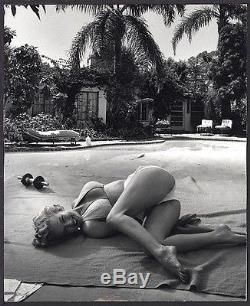 In the mid-forties Dienes met the nineteen-year-old Marilyn Monroe (then called Norma Jeane Baker) who was a model on the books of Emmeline Snivelys Blue Book Model Agency. He became one of the first photographers to shoot the girl who would become the most famous woman of the 20th Century. The two would collaborate on several photo shoots until their last in 1961.

The offered photograph is perhaps one of the most provocative shots captured of Marilyn by Dienes that shows off her "curves". And most importantly, the offered photo is a period 1950's exemplar from Dienes that was made in the 1950's by his own hands! The photo is a LARGE-format doubleweight example from his estate and comes with unmatched provenance.