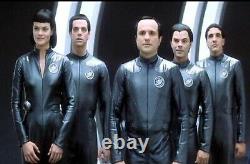 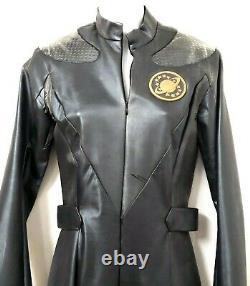 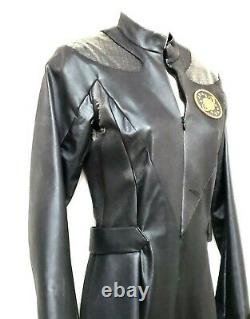 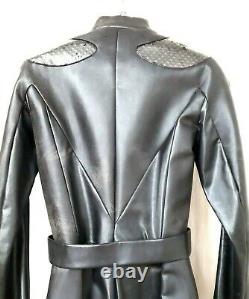 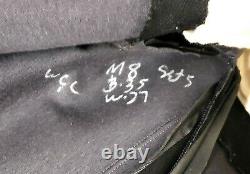 THERMIAN SPACESUIT / THERMIAN FEMALE. TIM ALLEN / SIGOURNEY WEAVER / ALAN RICKMAN / TONY SHALHOUB / DARYL MITCHELL. WE SPECIALIZE IN OLDER VINTAGE MOVIE WARDROBE AND HAVE THOUSANDS OF REAL MOVIE WORN ITEMS IN CURRENT INVENTORY. It was worn in the movie'GALAXY QUEST' by one of the Female THERMIANS.

The Spacesuit is done in a silvery-black poly material that is slightly stretchy. The shoulders / yoke has a clear dotted rubber over them that you can see in the close up. The outfit has an attached belt from side front around the back. The legs have attached stirrups in a wide black stretch material.

It has a numbered label from Western Costume Company; a WCC stamp;'Set 5' and'M8' (Misses size 8) in it also. It is marked a 35" bust and 27" waist. NOTE: This Spacesuit has wear to the poly material throughout the outfit - mostly where there would be movement. GALAXY QUEST' (1999) stars TIM ALLEN; SIGOURNEY WEAVER; ALAN RICKMAN; TONY SHALHOUB; SAM ROCKWELL; DARYL MITCHELL and many others! A brief synopsis: Eighteen years after their sci-fi adventure show "GALAXY QUEST" was canceled, actors Jason Nesmith (TIM ALLEN), Gwen DeMarco (SIGOURNEY WEAVER), Alexander Dane (ALAN RICKMAN), Tommy Webber (DARYL MITCHELL), and Fred Kwan (TONY SHALHOUB) are making appearances at sci-fi conventions and store openings in costume and character. They're wallowing in despair and at each other's throats until aliens known as THERMIANS arrive and, having mistaken the show for fact and consequently modeling their entire culture around it, take them into space to save them from the genocidal General Sarris (ROBIN SACHS) and his armada. Keep in mind we sell Hollywood Wardrobe that is collectable. Please remember Communication is EVERYTHING because we will bend over backwards to help our valued customers. The item "GALAXY QUEST (1999) THERMIAN FEMALE OUTFIT / JUMPSUIT MOVIE WORN WESTERN COSTUME" is in sale since Sunday, November 29, 2020. This item is in the category "Entertainment Memorabilia\Movie Memorabilia\Wardrobe\Originals". The seller is "hollywoodmoviecostumes" and is located in Hesperia, California. This item can be shipped worldwide.