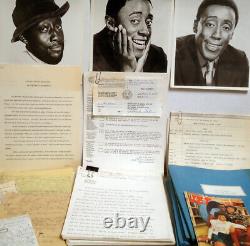 Five bound copies of a teleplay "I'd Rather Do It Myself" by Godfrey Cambridge and Pat Nation in various stages of editing. It was apparently intended to be an episode of Young Dr. Kildare, a syndicated medical drama television series which originally ran from September 21, 1972, for a total of 24 episodes.

According to online records, this episode was never aired. As an interesting footnote, Cambridge had studied medicine at Hofstra College in NY before he dropped out to pursue a career in acting. A nine-page essay titled, "My Favorite Vacation" about his first trip to Sweden. Two copies of a sixty-two page outline for an intended autobiography/memoir, mostly professional with some of his personal life woven into the narrative.

Written in a personalized shorthand, with Cambridge frequently referring to himself in the third person. Much of the narrative concerns his appearances, performances and show-biz relationships. One of the copies has a few marginalia not present on the other one. Two documents from McFadden, Strauss & Irwin, a PR firm. One lists him as a client along with two pages of other show biz luminaries.

The second is an 8-page professional bio outlining his career and comic philosophy. A 10-page (blank) application and membership info for the Writers Guild of America, West. Four 8x10 glossy (unsigned) publicity photos. Unlike the biographical outline, this document does not contain personal information or commentary.

Receipt to Writers Guild of America (08/14/1972) for registering the teleplay "I'd Rather Do It Myself" for the TV show Young Dr. Four double-sided handwritten pages of diverse notes containing story and/or book ideas. Five double-sided small notepad handwritten sheets on diets and recipes.

Evidently Cambridge had fluctuating weight issues throughout his life. Three double-sided larger notepad paper with handwritten autobiographical notes that appear to be seminal moments and experiences in his life. Envelope from Black Academy of Arts and Letters, Inc. With various handwritten notes on back. Cover article from Jet Magazine (11/25/1975) on Cambridge and his third wife. All in very good condition with handwriting legible. This item is in the category "Entertainment Memorabilia\Movie Memorabilia\Other Movie Memorabilia". The seller is "forowan" and is located in this country: US. This item can be shipped to United States.