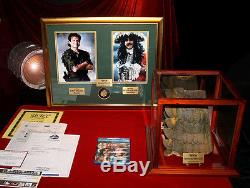 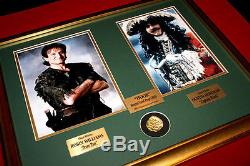 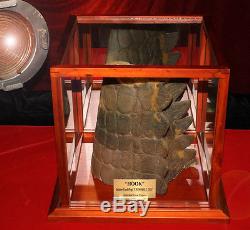 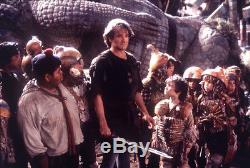 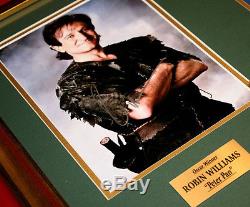 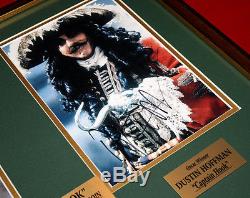 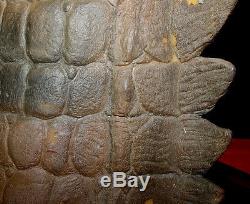 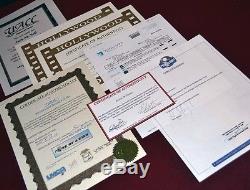 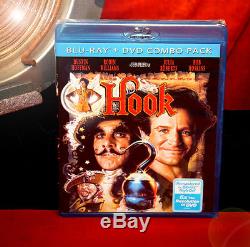 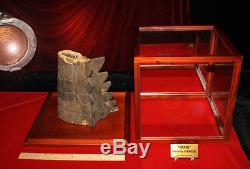 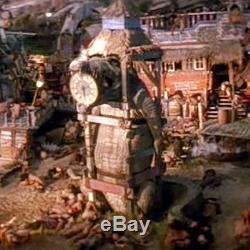 ", "WARM BODIES, " "CASINO ROYALE, " "NIGHTMARE BEFORE CHRISTMAS, " "GONE WITH THE WIND, " "CHRONICLES OF RIDDICK, " "HANNIBAL, " "BATMAN, " "IT'S A WONDERFUL LIFE, " "SUPERMAN, " "GRINCH, " "SOPRANOS, " "SOPRANOS, " "NATIONAL TREASURE, " "SKYFALL, " "SPIDER-MAN" & "PIRATES of the CARIBBEAN + dozens of other Films & Television shows, many destined to become Classics that will live on for millions of viewers for years to come. The fantastic genuine PROPS & AUTOGRAPHS includes a copy of the Original Certificate of Authenticity from Premiere Props + Autograph World & Piece of the Past that guarantees these screen-used original PROPS & AUTOGRAPHS genuine and the entire set is guaranteed for life by UACC RD#228. You also get this wonderful, ORIGINAL SIGNED Autographed Photo of ROBIN WILLIAMS as "PETER PAN" with engraved Description Plaque. Robin signed this 8x10 color photo in SILVER marker.. You also get this Rare, ORIGINAL SIGNED color 8x10 photo of DUSTIN HOFFMAN as Captain Hook. Oscar Winning actor Dustin Hoffman signed in black marker... A brass description plaque is mounted under the double matted autographed photo. This Framed EXHIBIT measures approximately 22" X 18".. Both "HOOK" Autographs & Prop Coin DISPLAY are mounted under glass in a new gold frame with 3 engraved Description Plaques. And is just ready to hang on the wall of your home, office, media room or museum! These rare & unusual props were made and assembled in 1991 by Mark R.

Wade & his fellow prop makers at Amblin Entertainment and used in the soundstages at Sony Pictures Studios. Peter Pan (Williams) has grown up to be a cut-throat merger and acquisitions lawyer, and is married to Wendy's granddaughter. With the help of her and the Lost Boys, he must remember how to be Peter Pan again in order to save his children by battling with Captain Hook once again. You receive this actual RARE genuine piece of the CROCODILE TAIL from "Hook" inside a Display CASE...

Inside the Display Case is an engraved description PLAQUE on a stand... The tail is made of strong fiberglass inside and covered with a soft foam painted croc skin that is molded to look like a crocodile! Here's a close up of the soft foam type painted outside crocodile skin... The crocodile is mounted in the middle of town with a CLOCK in his mouth, but falls over in the end of the film and swallows up Captain Hook... The Case is glass and wood with a mirror on the back and the top lifts off so you can feel or handle the "Croc" piece...

Here's "Peter" (Robin Williams) with his Lost Boys after the croc has fallen! We acquired this entire tail section years ago from Premiere Props and we carefully cut it down into smaller sections... You also get a copy of the original Letter of Authenticity from Premiere Props signed by DGA Director Jack M.

Sell, who did the cuttings. Matted under the glass is this genuine Screen-Used Prop COIN... Comes with COA from DGA Film Director Jack M. This is exact coin you will receive with photos here of the front and back.

This Prop COIN is part of the Captain Hook and the Pirate's "booty".. Of course, you get 4 CERTIFICATES OF AUTHENTICITY for the Robin Williams Autograph, Dustin Hoffman Autograph & the Movie PROP Croc Tail piece & Gold COIN... All guaranteed genuine for life by UACC Registered Dealer #228. You also get an original factory sealed Blu Ray NTSC (region One) DVD of this classic film so you can enjoy watching this classic film! This one-of-a-kind framed ROBIN WILLIAMS AUTOGRAPH & "HOOK" Coin PROP is framed and ready to hang on your wall of you media room, office or museum. If this autograph is declared not to be authentic, we may ask the purchaser to supply the full written opinion of one competent authority acceptable to us. CNN reported that Oscar-winning actor and comedian Robin Williams apparently took his own life at his Northern California home Monday, law enforcement officials said.

"He has been battling severe depression of late, " his media representative Mara Buxbaum told CNN. This is a tragic and sudden loss. The family respectfully asks for their privacy as they grieve during this very difficult time. Coroner investigators suspect "the death to be a suicide due to asphyxia, " according to a statement from the Marin County, California, Sheriff's office.

This morning, I lost my husband and my best friend, while the world lost one of its most beloved artists and beautiful human beings. On behalf of Robin's family, we are asking for privacy during our time of profound grief. As he is remembered, it is our hope the focus will not be on Robin's death, but on the countless moments of joy and laughter he gave to millions.

Word of Williams' death stunned the entertainment community Monday. Comedian Steve Martin tweeted, I could not be more stunned by the loss of Robin Williams, mensch, great talent, acting partner, genuine soul. " Former CNN host Larry King said he would he remember Williams as "a genuine caring guy. Not just a funny man, but a guy who cared about people. Marin County deputies responded to an emergency call from Williams' home in unincorporated Tiburon, California, at 11:55 a.

Reporting "a male adult had been located unconscious and not breathing, " the release from the sheriff said. Williams was pronounced dead at 12:02 p. Williams was last seen alive at his home, where he lives with his wife, at about 10 p. Sunday, the sheriff's statement said.

"An investigation into the cause, manner and circumstances of the death is currently underway by the Investigations and Coroner Divisions of the Sheriff's Office, " the sheriff's statement said. Coroner Division suspects the death to be a suicide due to asphyxia, but a comprehensive investigation must be completed before a final determination is made. An autopsy is scheduled for Tuesday, the sheriff said. Williams made at least two trips to rehab for drug treatment, including a visit this summer, and he underwent heart surgery in 2009. Williams, born in Chicago on July 21, 1951, studied theater at Juilliard School before taking his stand up act to nightclubs.

He was cast as Mork, an alien visitor to Earth, for a 1974 episode of television's Happy Days. " "Happy Days" star Henry Winkler said it was "unimaginable that this is the reality today, that this incredible human being, incredible, delicate, funny, dramatic human being is gone.

" Winkler said he "realized I was in the presence of greatness at Williams' first rehearsal as Mork. "I just realized my only job is to keep a straight face, " said Winkler, who played The Fonz.

Because no matter what you said to him, no matter what line you gave to him, he took it in, processed it, and then it flew out of his mouth, never the same way twice. And it was incredibly funny every time. " The role led to the spin-off show "Mork & Mindy, which showcased Williams' usual comic improvisation talents. He proved his dramatic acting skills in "Good Will Hunting, " a 1997 film that earned him a best supporting actor Oscar.

His memorable movies over the past three decades includes "Good Morning, Vietnam, " "Dead Poets Society, " Mrs. The list is much longer. Williams credited the influence of Jonathan Winters' comic irreverence and quirky characters as a great influence on his comedy.

The connection between the two was completed when Winters was cast as Williams' son on Mork & Mindy. " When Winters died in 2012, Williams said, he was "my idol, then he was my mentor and amazing friend. " He tweeted that Winters was his "Comedy Buddha. What more can be said?

WIlliams and Dawber reunited on TV earlier this year on an episode of the CBS comedy The Crazy Ones. " Williams' fans can look forward to four more movie appearances coming to theaters, including another installment in the "Night at the Museum franchise. The film, set for a December release, has Williams reprising the Teddy Roosevelt role he delivered in the first two comedies. The original Props & Autographs have been stored in an acid free case in a smoke free, pet free environment until removed to put in the exhibit.

Check out our other auctions for more TV & Movie Collections that include wardrobes, props & autographs. Sell is a Registered Dealer with the U. We are proud that some of our memorabilia is on display in the SMITHSONIAN, Washington, D. Heimdell51 Praise: Great guy; very prompt & efficient service & exc. Packaging; got a free bonus too!

Jimsoden Praise: Great packing, good emails, very generous with his time and effort, class act!!! Circus10 Praise: Fabulous costume, vintage RBBB. Belfast Praise: Wonderful Ebayer & with genuine COA's too! THANKS TO THE OTHER 9000 GREAT EBAYERS WE'VE HAD THE HONOR OF WORKING WITH FOR OVER 15 YEARS.... AND, WE LOOK FORWARD TO MEETING MANY MORE GREAT EBAYERS IN THE FUTURE FROM ALL OVER THE WORLD! GOOD LUCK on this great Framed "HOOK" Collection that includes an Original ROBIN WILLIAMS Signed Autograph Photo with COA, Original DUSTIN HOFFMAN Signed Autographed Photo with COA, Original screen-used PROP "CROCODILE" Tail piece & a copy of the LOA (Letter of Authenticity) from Premiere Props, Original screen-used Prop "COIN" from Captain Hook's treasure with COA, Double Matted Frame with Engraved Description Plaques and a factory sealed Blu Ray DVD of this classic movie HOOK. Of course, the entire collection is guaranteed genuine for life by UACC Registered Dealer #228... A GREAT piece of MOTION PICTURE history.... A real "One of a Kind" Find & Conversation Pieces.... Movie & Television Props & Autographs can make for a good investment as well! Check out our other auctions for more great finds that include Props, Costumes & Autographs for your favorite movies... Imagine giving this great Autographed "HOOK" movie collection to the ROBIN WILLIAMS Fan in your family or just keeping it for yourself for what could be a good investment! A GREAT MOTION PICTURE COLLECTION from a classic film, HOOK. VERY RARE & VALUABLE ONE OF A KIND PROP & AUTOGRAPH COLLECTION!!

You may be gone, but you will never be forgotten. The item "HOOK Robin Williams as PETER PAN, SIGNED, Prop CROC, Blu DVD, COA, UACC" is in sale since Monday, June 05, 2017. This item is in the category "Entertainment Memorabilia\Movie Memorabilia\Props\Originals". The seller is "jackmsell" and is located in New Port Richey, Florida.