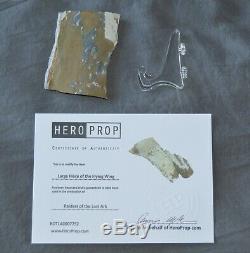 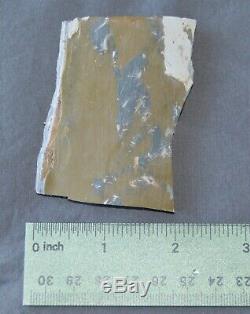 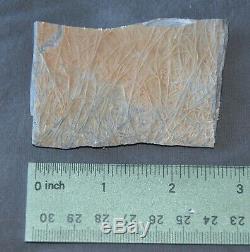 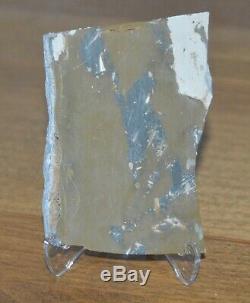 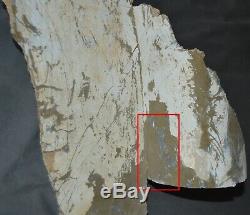 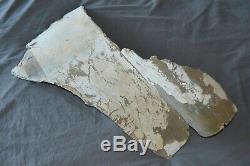 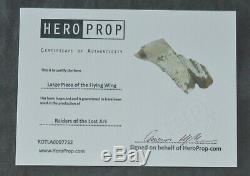 This listing is for an original 2" x 2.5" piece of the Flying Wing aircraft from Raiders of the Lost Ark. They designed a prop that was able to drive around the airfield and spin its propellers, with a frame sturdy enough for the actors to climb and fight on top. Only one was built, and at the end of shooting, it was blown up on the airfield set in Tunisia. The crew hauled away the main structure, but several smaller pieces were left behind.

20 years later in 2001, the remaining pieces were recovered from the site, including this one. This fiberglass piece is from the exterior shell of the craft. After being blown up and then lost for 20 years in the Tunisian desert, this piece is heavily weathered, and the paint is mostly missing.

But it's a great way to own an original artifact from the film. The back of the piece is still encrusted with dirt from "Tanis". This originally came as part of a larger piece I bought from HeroProp. This was a very expensive piece that was normally outside of my budget. The original COA is not included, but I will include a color photocopy of it.

In addition, I will include a mini display easel as shown. The winner will receive the exact items shown in the first photos, so please refer to those for a closer look. Thank you for viewing this listing! The item "Indiana Jones Original Prop Screen Used Artifact Flying Wing Raiders of Lost Ark" is in sale since Thursday, June 25, 2020.

This item is in the category "Entertainment Memorabilia\Movie Memorabilia\Props\Originals".enterprises" and is located in Salt Lake City, Utah. This item can be shipped worldwide.