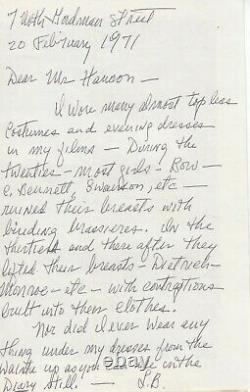 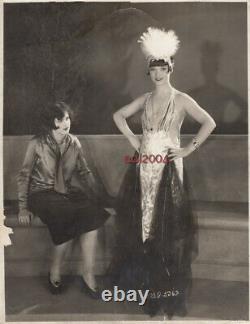 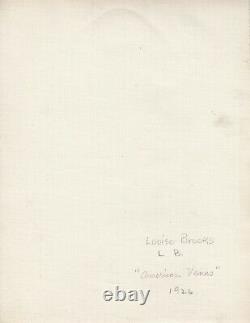 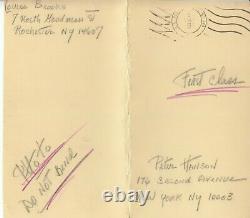 The film is believed to be lost, although pieces of the film's trailer survive and can be viewed on YouTube. This is an extremely rare photo, especially being a linen-backed portrait of this RARE star. This is also a RARE vintage original in that it is the 2nd film this actress made, therefore, very early in her career.

The back of the photo has the film star, film and year lightly written in pencil. Also, with this listing is an autograph letter written by LOUISE BROOKS with her own hand in black ink, dated February 20, 1971 to PETER HANSON in which she discusses this dress. She mentions that in the 1920s CLARA BOW, CONSTANCE BENNETT, GLORIA SWANSON, ruined their breasts with wearing binding brassieres. Later in history, she stated MARLENE DIETRICH and MARILYN MONROE wore contraptions built into their clothes. According to LOUISE BROOKS, in this letter she stated she never wore anything under her dress and she references this photo to prove her point.

On the inside of this letter, one will see a copy of this same photo she is referencing to help prove her point about not wearing binding brassieres and evidently to make sure PETER HANSON understood she is referencing this dress. The envelope clipping has a date stamp of February 20 in New York, which is the same date LOUISE BROOKS dated the letter. Her full address is written by LOUISE on the envelope clipping (See Attached). There is one hard crease in the upper background near the middle of the top border. There is a small area of top paper loss in the background near the left border (See Scan).

There is some light edge wear in the corners of the photo. The letter and envelope clipping are in Very Good Condition. The letter does have a crease near the center of the letter, which was caused by the letter being filed away in a photo binder for years.

Also, the envelope clipping which was all written in pencil by LOUISE BROOKS with her own hand, has a crease down the middle in order to file away in a photo binder for years. This is a VINTAGE ORIGINAL Photo and an Original Autograph Letter with Original Envelope Clipping and NOT a Reproduction Restrike. The item "LOUISE BROOKS Vintage Original Photo 1926 AMERICAN VENUS & Autograph LETTER Rare" is in sale since Saturday, August 24, 2019. This item is in the category "Entertainment Memorabilia\Movie Memorabilia\Photographs\Pre-1940\Black & White".

The seller is "edi2004" and is located in Carrollton, Virginia. This item can be shipped worldwide.