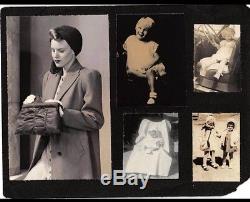 ITEM: This is a set of antique candid original great photos of Marilyn Monroe. It looks like they were taken from a photo album page. The page says'unpublished' on the back and includes her name as well as her original name "Norma Jean". One of the photos looks like it was a Norma Jean modeling photo but I'm not sure if it is though. This still could be an opportunity to have a vintage piece of Hollywood history.

Since these are unpublished, it's very hard to google these specific baby photos of Marilyn to verify it is her. The baby picture in the far left is in fact Marilyn but I'm not too sure about the rest. So this is truly a rare opportunity to get a lovely set of Monroe photos from when she was a baby up till her youth.

These are unpublished used photographs that are single weight paper stock and is glued to a vintage piece of black paper. As mentioned above, it looks like it was a page taken out of a old photo album. A fine photo set to display in a photo album or by matting and framing.

Please feel free to ask questions. Thanks for looking and good luck! Probably the most celebrated of all actresses, Marilyn Monroe was born Norma Jeane Mortenson on June 1, 1926, in the charity ward of the Los Angeles General Hospital. Prior to her birth, Marilyn's father bought a motorcycle and headed north to San Francisco, abandoning the family in Los Angeles. Marilyn grew up not knowing for sure who her father really was.

Her mother, Gladys, had entered into several relationships, further confusing her daughter as to who it was who fathered her. Afterward, Gladys gave Norma Jeane (Marilyn) the name of Baker, a boyfriend she had before Mortenson. Poverty was a constant companion to Gladys and Norma.

Gladys, who was extremely attractive and worked for RKO Studios as a filmcutter, suffered from mental illness and was in and out of mental institutions for the rest of her life, and because of that Norma Jeane spent time in foster homes. When she was nine, she was placed in an orphanage where she was to stay for the next two years. Upon being released from the orphanage, she went to yet another foster home.

In 1942, at age 16, Norma Jeane married 21-year-old aircraft plant worker James Dougherty. The marriage only lasted four years, and they divorced in 1946.

By this time, Marilyn began to model swimsuits and bleached her hair blonde. Various shots made their way into the public eye, where some were eventually seen by RKO Pictures head. He offered Marilyn a screen test, but an agent suggested that 20th Century-Fox would be the better choice for her, since it was a much bigger and more prestigious studio. The item "Marilyn Monroe VINTAGE ORIGINAL Baby Photos" is in sale since Monday, May 22, 2017. This item is in the category "Entertainment Memorabilia\Movie Memorabilia\Other Movie Memorabilia".

The seller is "makatrelli" and is located in Palm Coast, Florida. This item can be shipped to United States.