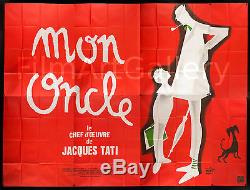 Huge re-issue French 8 Panel billboard poster for the 1958 film'Mon Oncle' /'My Uncle', directed by and starring Jacques Tati. This poster is for a late 1970's re-release of the film and uses the original poster artwork (by Pierre Etaix). Because the film was such a success, it was re-released a number of times.

Classic poster for a classic film. Total size is approximately 124" x 160" inches, and it is comprised of 8 separate pieces.

Poster is in excellent, unused condition: folded as issued with minor fold and edge wear but no major flaws. Please note that the magnets in the borders are used during the photographic process and are not pushpins or elements of the design. PLEASE SEE MY OTHER AUCTIONS AND STORE ITEMS FOR COOL MOVIE POSTERS. It must come back in the same condition as it was sent.

FILM/ART has one of the finest collections of original movie posters. The item "MON ONCLE/MY UNCLE huge French billboard poster Jacques Tati RI Filmartgallery" is in sale since Tuesday, March 8, 2016. This item is in the category "Entertainment Memorabilia\Movie Memorabilia\Posters\Originals-International\1950-59". The seller is "filmartgallery" and is located in Los Angeles, California. This item can be shipped worldwide.