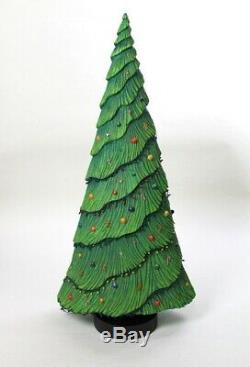 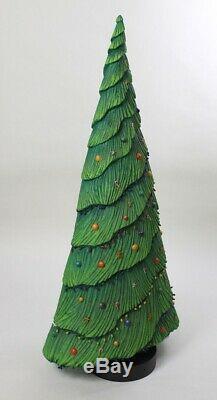 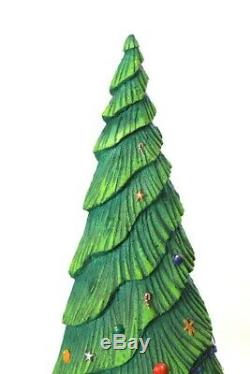 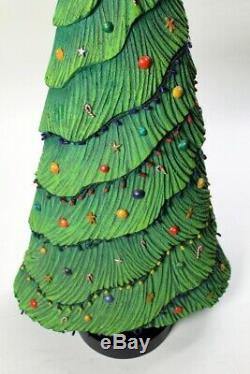 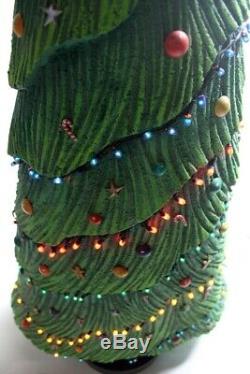 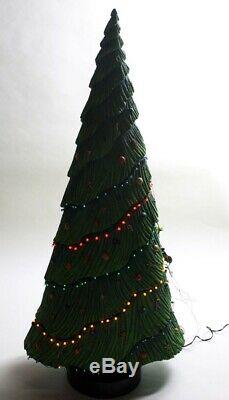 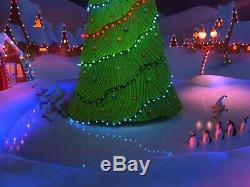 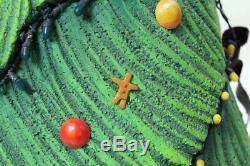 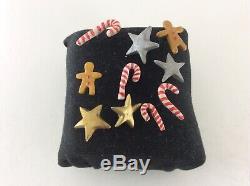 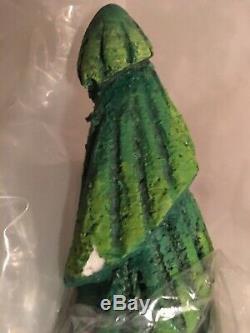 In the center of Christmas Town is THIS large, decorated Christmas Tree set on a frozen pond. Elves play hockey and penguins skate by the base of this gorgeous example of the Tim Burton Art Style. This is your chance to bring THE premier example of a Christmas Tree Prop in Disney movie history to your home. When I began collecting, there was only a handful of licensed NBC collectibles available: a line of figures, a pair of Jack and Sally dolls and a few books.

During the nearly 20 years that this tree has moved around the country with me, The Nightmare Before Christmas has grown from a quirky favorite of fans of Stop Motion Animation into a mainstream darling that has been wholeheartedly embraced by Disney Studios. As anyone that has been to The Haunted Mansion Holiday at either Disneyland or Tokyo Disneyland can attest, the Christmas Town style has become an ongoing addition to the tradition of "Disney and Christmas". The Christmas Town Christmas Tree has been my favorite collectible largely due to the range of my interests that it appeals to. When I first played Kingdom Hearts II in 2006, I became very excited when I realized that the main characters of Sora, Donald and Goofy were going to visit Christmas Town. Imagine the thrill that I felt when, not only did they visit "my" Christmas Tree, but they had a Boss Battle in front of it (see photo #9 for a screenshot from the game).

If I had known that Square Enix was going to include this tree in one of my favorite games, I would have given them access to it so that they could make a better in game replica. Besides those interests of mine, this tree should have a wonderful cross-over appeal to anyone who collects movie props in general. Stop Motion props collectors and Tim Burton fans in particular should find it particularly appealing. My hope is that whomever owns the tree next uses it as the core of an unmatchable Christmas Display. The tree is 46 inches tall and has a custom made base that adds 2 inches to the overall height when displayed.

The structure is carved styrofoam and it is fully painted on all sides. The lights are all original and functional. The original wiring has been incorporated into a power converter with a conventional two prong outlet (US). Personally, I would have loved to have won all of those props, but I decided to put all of my efforts into winning the tree as it is THE centerpiece of Christmas Town and I knew that I would regret not "taking my best shot" at such a rare opportunity. When I received the tree, I was stunned by its size and beauty.

While it never effected my enjoyment of it over the years, the tree did have one major and several minor condition issues that, presumably, resulted during the set breakdown process. In 2016, I decided to have these issues repaired by the world class restoration artists at the Tom Spina Designs studio. For those of you unfamiliar with their work, I strongly suggest that you visit their website and examine some of their amazing restoration projects, including many original The Nightmare Before Christmas props. (If requested, I can provide some high quality "Before" photographs taken prior to the restoration). Tom Spina and I had many enjoyable conversations before, during and after the restoration process.

According to him, everyone at the studio were quite excited to work on such a large and iconic prop from one of their favorite movies. We discussed all of the issues and improvements at length with attention to what would be best for this unique piece of film history. The following issues were expertly addressed/repaired. That single piece was expertly reattached and the prior damage is basically unnoticeable now. There were several smaller areas of scuffs/paint loss that were refilled and paint-matched to the original color. The original lights were connected to an unknown power source on the set. The original wires that came from the tree are still present and are now connected to a conventional power converter so that the tree can be plugged into a standard (US) power outlet.

Happily, all of the original lights still function. Several ornaments were missing and one of the Gingerbread Men had broken so that only one leg remained. The artists made beautiful replica ornaments to replace the missing ornaments so that the tree once again appears as it did on screen. (see photo #10 to see how well they matched the replacement Gingerbread Man to the original leg and photo #11 to see the additional ornaments). Additionally, the following improvements were made to the prop during the restoration.

Stand Hole: We decided to make a small hole in the bottom of the tree so that it could be placed on a stand or be incorporated into a display. Base Stand: A custom base was crafted to support the tree so that it can stand freely. The base is a 10 inch diameter circle that is 2 inches tall and is painted matte black. Additional Ornaments: Where ornaments were missing from the lower 3/4ths of the tree, screencaptures were used as a guide to determining the type and location of their replacements. Careful inspection of these sites tended to show minor paint loss or at these locations to further confirm the exact location of the original ornaments. The upper 1/4th of the tree had a few scattered ornaments when I first received it and had small spots of paint loss that may have indicated the presence of ornaments at some point. Despite many years of searching, I was never able to find a "behind the scenes" image of the Christmas Town set that showed the top quarter of the tree on set to confirm wether there ever were ornaments on this portion of the prop. Tom Spina and I decided that the best solution would be to repair all of the spots of paint loss and then create 10 additional ornaments. They are glued onto the heads of very thin pins so that any future owner could decide wether to place (or remove) them as they wish. The tree is in wonderful condition after the restoration and, as it has been stored in dark, climate controlled conditions for the vast majority of the last 20 years, the paint colors are vivid and the underlying styrofoam shows no signs of degradation.

Please feel free to ask me questions; I will try to respond promptly. I believe that this tree will make the next owner as happy as it has made me for the last 20 years. The item "Nightmare Before Christmas Prop Christmas Tree. 46 Screen Used Disney Original" is in sale since Saturday, August 3, 2019.

This item is in the category "Entertainment Memorabilia\Movie Memorabilia\Props\Originals". The seller is "mstrfrz" and is located in Norfolk, Virginia. This item can be shipped to United States.