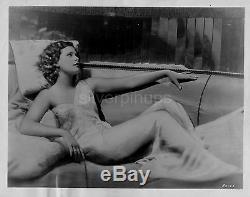 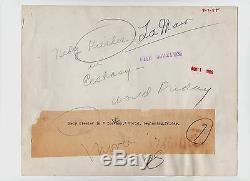 This is a VERY RARE original circa 1933, 8 x 10 inch full length portrait of 19 year old, HEDY LAMARR (then Hedy Kiesler) provocatively posed in a thinly veiled negligee. Publicity for the 1933 Czech/Austrian film, "ECSTASY". This still was originally archived on Nov. This film was highly controversial and was banned in the US until late 1940. However it was freely shown in European countries throughout 1934.

It was the first non-pornographic film to portray sexual intercourse and full frontal nudity of Lamarr. This image was from the original 1933 release of the film.

She would not make another film until five years later in MGM's "Algiers". Her name would change from Kiesler to Lamarr and the film would launch her into American Stardom.

The photo is in VERY GOOD condition with some surface impressions, corner creasing and edge wear. There is also light publication touch-up to accentuate her image. Original Stills from this film are Extremely Scarce! The item "Orig 1933 HEDY LAMARR (Hedy Kiesler) Soft Focus. Risqué ECSTASY Portrait" is in sale since Monday, January 16, 2017.

This item is in the category "Entertainment Memorabilia\Movie Memorabilia\Photographs\Pre-1940\Black & White". The seller is "silverpinups" and is located in Winnipeg, Manitoba. This item can be shipped worldwide.