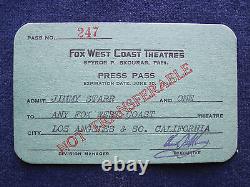 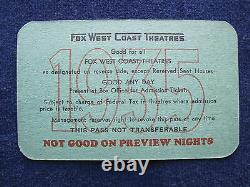 The pass is issued to Jimmy Starr "And One To Any Fox West Coast Theatre" in Los Angeles and Southern California and is marked "Not Transferable" with an expiration date of June 30, 1935. Management reserves the right to revoke this pass at any time. This Pass is Not Transferable, Not Good on Preview Nights. " With "1935 stamped in red.

About fine with the barest hint of use. Jimmy Starr (1902 - 1990) is best known as a Hollywood columnist, though he was also a writer and actor, known for The Corpse Came C.

(1947), A Night for Crime (1943) and Pink Pajamas (1929). The Fox Theatre chain of movie theaters in the U. Began in the 1920s by the Fox Film Corporation and in 1929 merged with the West Coast Theatres, with many of them built as grand movie palaces featuring a variety of exotic architectural styles. This item is in the category "Entertainment Memorabilia\Movie Memorabilia\Other Movie Memorabilia".