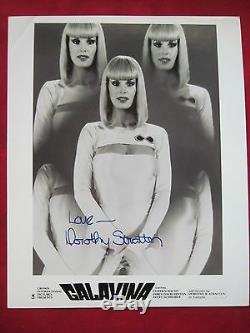 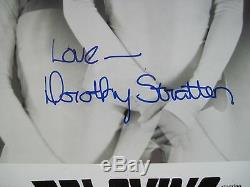 Original Black & White Photograph Portrait Signed by Dorothy Stratten in Her Role In the Film - Galaxina. 8 by 10 inches, 1980. A very rare signed glossy portrait of Dorothy Stratten in her role as the beautiful android robot in the science fiction film - Galaxina - an amusing parody of sci-fi films like Star Wars and Alien. Signed in blue ink - Love, Dorothy Stratten. The film was released shortly before her tragic murder at the age of 20. Playboy Playmate of the Year for 1980, her great beauty and acting talent put Stratten on a rapid rise. Having just finished filming dierctor Peter Bodanovichs They All Laughed with whom she fell in love, Stratten was suddenly murdered by her estranged husband. Slight creaese in the upper left hand corner, else fine. Very little Stratten autograph material has survived.

The item "ORIGINAL SIGNED PHOTOGRAPH OF DOROTHY STRATTEN IN GALAXINA SCIENCE FICTION FILM" is in sale since Saturday, September 6, 2014. This item is in the category "Entertainment Memorabilia\Movie Memorabilia\Photographs\1980-89\Black & White".