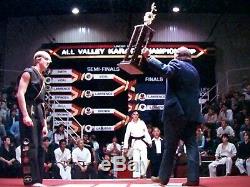 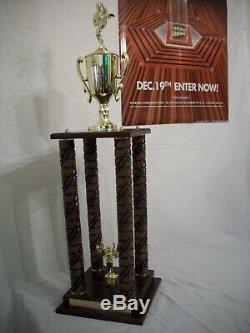 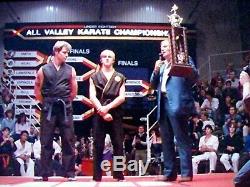 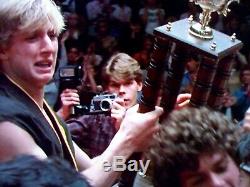 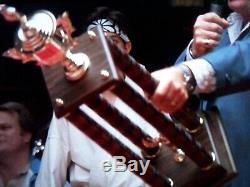 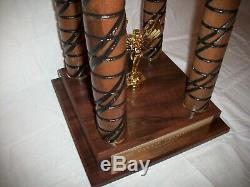 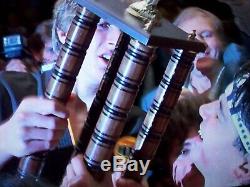 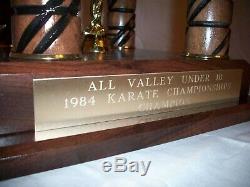 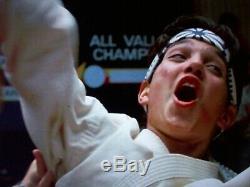 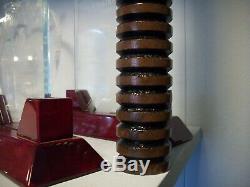 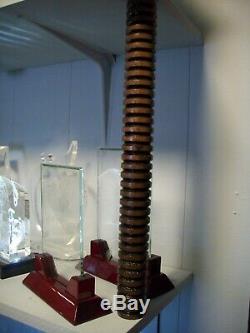 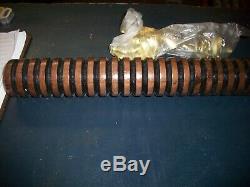 The wood columns for this trophy, as it appears in this listing, is OUT. (1 more case on back order - 4 months). NEW CHOICE: 1980's era'wood columns' are available NOW, if you don't want to wait 3 -4 months for the previous wood columns. "The Karate Kid" has always been my favorite film of all-time. I was a kid when it came out in 1984 and the movie had a big influence on my life, and led me to become a martial artist. I say this because, I want you guys to know that I'm a true'long-time' fan. Fans are the best at creating replicas from movies, because we study every scene and make sure it is as'screen accurate' as possible! With that said, I'm offering something to all the'Karate Kid' fans out there, that has never been offered before... For the first time EVER, an'almost perfect' replica of the coveted "All Valley Under 18" Karate Championship trophy as seen in the 1984 film,'The Karate Kid'.

Painstakingly re-created to exact proportions and using the same 1980s - era correct materials. This trophy is REAL, made of solid wood, metal & gold-plated plastic. It stands an impressive 3 feet tall and weighs 10 lbs.

I have partnered with my local trophy shop that's been in business since 1967 to build these trophies. Using'wood' in trophy building is almost non-existent today as people have been using more plated plastics. We searched my guy's entire warehouse of old stock parts & everywhere online to match the wood columns as they appeared in the movie...

We could only find 1 supplier that still had a few cases of 1980's - era wood columns in N. And we selected the ones that were the closest match. We only have enough to make a limited run...

When we run out, that's it. The'karate man' on top of the trophy is exact to the movie, as well as the trophy cup, but we could NOT find a trophy cup with the same'handles' that appear in the movie. That's basically the only (2) things that keep this trophy from being 100% screen accurate... The cup handles & the'ring pattern' on the wood columns. It looks to be (3) lines of text...

The top line definitely states'All Valley Under 18'. That's how I chose the inscription. There is an old clip on YouTube from the'Oprah' show where she interviewed Ralph Macchio at his home, and he shows the screen used trophy, up close.

When the filming was complete, the producers gave Ralph the screen used HERO trophy, but they included a new gold plate with this inscription: RALPH MACCHIO. The 2019 NECA Karate Kid action figures had a'toy' trophy that read: All Valley karate Championship. Let me know which'inscription' you want on your trophy. The nut & bolt will be included so you can attach it after you remove the trophy from the large box. Each trophy will be insured & come with tracking#.

Made to Order Please READ.... Please ask me any questions before purchasing. The item "Ralph Macchio the Karate Kid movie original prop replica all valley trophy 1984" is in sale since Thursday, May 21, 2020.