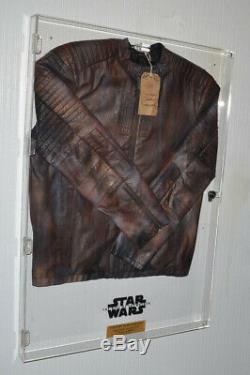 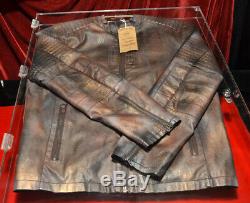 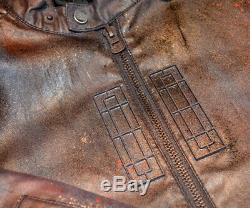 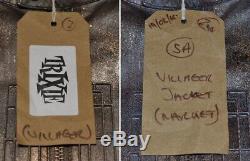 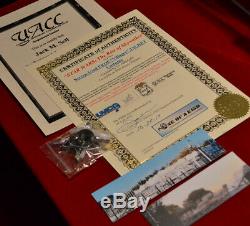 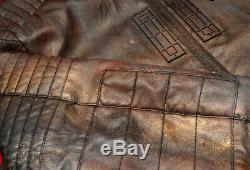 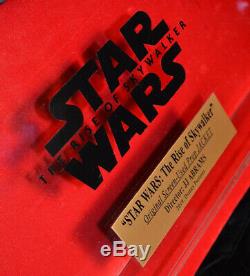 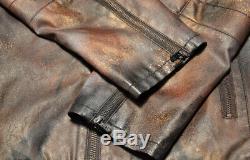 Acquired at PINEWOOD STUDIOS and used by a "VILLAGER" character on the lot at PINEWOOD STUDIOS. A Great find & a very RARE Screen-Used WARDROBE Prop! This Screen-Used Original Prop COSTUME from "STAR WARS: The Rise of Skywalker A New Hope" comes in a Museum Display CASE with Locks, an engraved Description PLAQUE, a Star Wars LOGO & includes the original Certificate of Authenticity from D. Film & TV Director Jack M. Sell & UACC Registered Dealer #228.

Attached to this Prop COSTUME is the Original Pinewood Studio TAG with the "TRIXIE" sticker and scene information... Typically, a movie will create a working title so that people who see the set don't get too excited and try to bombard the movie's production trying to get on the set at Pinewood, essential for projects as large as. A Great New Motion Picture... This "One of a Kind" Screen-Used PROP "Villager" JACKET was obtained by a crew member working on the film production that started filming in 2018 at Pinewood Studios. I've been a D. Director of film & television for over 30 years & I've certainly loved these movies as much as any fan and this comes from my personal collection! Included is the original COA (Certificate of Authenticity) that guarantees this RARE PROP genuine for life by D. A Film & TV Director Jack M. This unique COSTUME was designed & custom made by Pinewood Costume Designer Michael Kaplan, key costume maker Sue Bradbear and her team of costume makers.

This screen-used Costume "VILLAGER" Jacket measures approximately 27" long, 19" across front of waist, 22" across shoulders, 26" from top seam down the sleeve.. Here's the reverse side of the beautiful Screen-used Costume "Villager" JACKET.. The new Display CASE measures approximately 36" high x 24" wide x 3 deep around the clear plexiglass CASE.. The new display CASE has a LOCK with the keys and hanging kit that's included with the display.. On the bottom of the CASE is the new STAR WARS logo in black with this engraved plaque that reads.

A Very RARE "STAR WARS" Display.. This rare piece was made by the Costume Designers at PINEWOOD has been used in the filming, but it does have some wear, but remains in overall good condition.. A Great Gift or Investment! This very RARE PROP of this Brown "VILLAGER" Star Wars Jacket that is used on-screen by the actors and includes the Original PINEWOOD STUDIOS "Trixie" Tag. S working title was changed to trIXie.

" The original working title was reported to be "Black Diamond, but that title was a no go. The working title trIXie probably isn't too significant, as "Trixie" doesn't sound like the name of anyone we would expect to see in the Star Wars universe. It's more than likely just an attempt to use the roman numeral "IX" in the working title, while the rest of the name likely bears no significance!

This is an actual RARE Prop COSTUME "Villager" JACKET that was used on-screen in the 2019 sci-fi classic, Star Wars: The Rise of Skywalker. This is one of the screen-used PROP COSTUMES created by Costume Designers at Pinewood Studios for use in filming of the 9th and final STAR WARS legacy film... Just ready to display or wear! STAR WARS: The Rise of Skywalker, the 9th and Final film in this saga, the surviving Resistance faces the First Order once more as Rey, Finn and Poe Dameron's journey continues. With the power and knowledge of generations behind them, the final battle commences. This original custom made Screen-Used Prop COSTUME was used on the set at PINEWOOD STUDIOS in Star Wars: The Rise of Skywalker. This RARE Prop is made of a faux leather type material, with detailing on the outside, with light gold paint splatters... Has some stretch to it as well!

All made to meet the high Lucasfilm standards. The Prop COSTUME is a great piece of Motion Picture history! And you can own a piece of film history, keep it as an investment and enjoy it for many years to come! The Prop COSTUME has great detail all over the surface of the Screen-Used COSTUME "Villager" JACKET. This "One of a Kind" Screen-Used Prop COSTUME "Villager" JACKET was acquired at PINEWOOD Studios by a crew member working on the film production that started filming in 2018 at Pinewood and includes the original COA (Certificate of Authenticity) that guarantees this RARE PROP genuine for life by D.

As a TV & Movie DIRECTOR and a lifetime member of the Director's Guild of America, D. Sell is offering some rare PROPS, AUTOGRAPHS & COSTUMES, ART & COLLECTIBLES from his personal collection from some great television & motion pictures, including "STAR WARS, " "RESIDENT EVIL, " APOLLO 13, " "STAR TREK, " "AMERICAN PIE, " "DIRTY DANCING, " "E. ", "AEON FLUX, " "WARM BODIES, " "CASINO ROYALE, " "WAR OF THE WORLDS, " "GONE WITH THE WIND, " "STAR TREK, " "CHRONICLES OF RIDDICK, " "HANNIBAL, " "BATMAN, " "RESIDENT EVIL, " "WIZARD OF OZ, " "IT'S A WONDERFUL LIFE, " "SUPERMAN, " "GHOST, " "NATIONAL TREASURE, " "SKYFALL, " "SPIDER-MAN" & "PIRATES of the CARIBBEAN + dozens of other Films & Television shows, many destined to become Classics that will live on for millions of viewers for years to come. The original "STAR WARS" Prop COSTUME "Villager" JACKET & Display Case have been stored in an acid free case in a smoke free, pet free environment since being acquired. Check out our other auctions for more TV & Movie Collections that include wardrobes, props & autographs. Sell is a Registered Dealer with the U. We are proud that some of our memorabilia on display in the SMITHSONIAN, Washington, D. Jdes7667: Just got my model. Btbandabbermake3s: Fantastic items, 30 Star Movie Maker! Heimdell51: Great guy; very prompt & efficient service & exc. Packaging; got a free bonus too!

I WAS VERY IMPRESSED AT THE WAY YOU PUT ALL THE PROPS TOGETHER. I PUT YOU IN ONE OF MY FAVORITES!

AND, THANKS TO THE OTHER 10,000 GREAT EBAYERS WE'VE HAD THE HONOR OF WORKING WITH OVER 15 YEARS... WE LOOK FORWARD TO MEETING MANY MORE GREAT EBAYERS IN THE FUTURE FROM ALL OVER THE WORLD! RARE "Star Wars" Movie PROP Collection that includes an Original RARE Screen-Used PROP genuine "Villager" Costume JACKET made & used at PINEWOOD STUDIOS in the 9th Star Wars film, "STAR WARS: The Rise of Skywalker, " the original COA guaranteed genuine by D.

Sell, a large DISPLAY CASE with a Death star Logo, engraved Plaques & Keys. This "One Of A Kind" Display CASE makes for a very dramatic display, all ready to display in your Home, Museum, Office or Media Room...

You can also open the front door of the case, remove the valuable COSTUME from the plexiglass hanger... A GREAT piece of STAR WARS MOTION PICTURE history....

A real "One of a Kind" Find & Conversation Pieces.. Movie & Television Props & Autographs could make for a good investment as well!

Check out our other auctions for more great movie & television PROPS, AUTOGRAPHS & COSTUMES, including actual real PROP pieces of the "DEATH STAR" from Star Wars IV! A GREAT GIFT or COLLECTIBLE! Imagine giving this ULTIMATE great STAR WARS movie collection to the Star Wars Fan in your family or just keeping it for yourself for what could be a good investment! WE ALSO OFFER A 3 MONTH LAYAWAY PLAN WHERE YOU CAN MAKE 3 EQUAL MONTHLY PAYMENTS TO US & WE DON'T CHARGE ANY INTEREST....

A GREAT MOTION PICTURE COLLECTION from this new exciting film, "STAR WARS: The Rise of Skywalker". VERY RARE & VALUABLE ONE OF A KIND PROP!!

It's very hard to find genuine Screen-Used Prop COSTUMES from this great movie... This would look great displayed in your home, media room, museum or office for years to come! The item "RARE Star Wars PROP Screen Used COSTUME JACKET, Rise of Skywalker COA, UACC CASE" is in sale since Thursday, November 7, 2019. This item is in the category "Entertainment Memorabilia\Movie Memorabilia\Props\Originals".