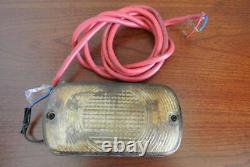 RESIDENT EVIL RETRIBUTION Movie Prop TRANSPORTER LIGHT Milla Jovovich COA. GENUINE & AUTHENTIC, original major motion picture movie prop! Here is your chance to own a part of this. This listing is for a "one of a kind", screen used movie prop from the 2012 film.

This Screen used transporter Light, "24 V" with red/black wires was used during the production of the film. This movie prop measures approximately 2.5" x 2" This prop includes a Certificate of Authenticity (COA). About the Film: Awakening in a top-secret Umbrella facility as the T-virus threatens to wipe out the last remnants of humanity, Alice (Milla Jovovich) must battle her way through virtual simulations in order to break out of the complex and save the Earth in this fifth. While the apocalyptic plague rages above ground, below the. Lies a massive base powered the evil supercomputer, the Red Queen, who will stop at nothing to contain humanity's only biologically-enhanced hope that is Alice. While factions in the Umbrella Corporation strive to help Alice escape, the Red Queen unleashes zombies, monsters, and clones of her ex-comrades to stop her. Only when Alice stumbles across a young girl who's been bred to think that she is her mother does the heroine find a new reason to live.

This film is the fifth installment in the. Film series, which is loosely based on the Capcom survival horror video game series.

This item is in the category "Entertainment Memorabilia\Movie Memorabilia\Props\Originals". The seller is "lost$$found" and is located in this country: US. This item can be shipped to United States.