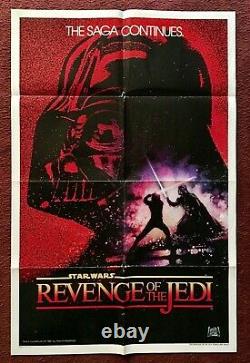 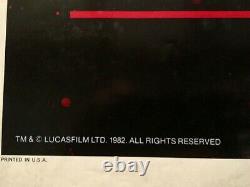 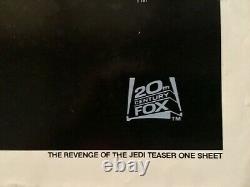 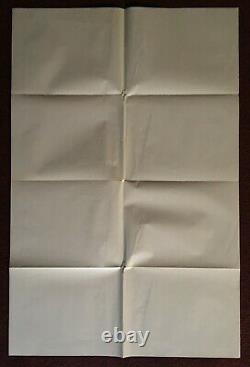 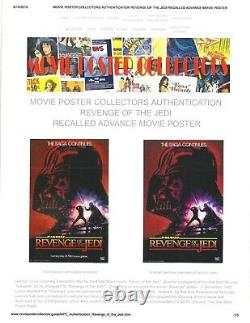 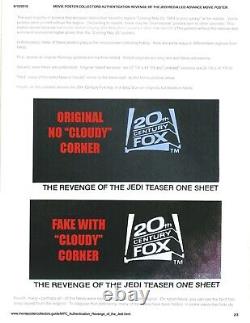 Offered here is a vintage original 26 7/8 x 40 13/16 in. US "teaser" one-sheet printed for the film's original title, REVENGE OF THE JEDI , released in 1983 by 20th Century-Fox and directed by Richard Marquand. The film was subsequently retitled Return of the Jedi and is now known as Star Wars: Episode VI - Return of the Jedi. However, by that time, thousands of Revenge posters had been printed and hundreds had been distributed to theaters. Also according to this article, the vast majority of posters that escaped destruction have the tagline "Coming May 25, 1983 to your galaxy" at the bottom. Some posters were printed without this tagline which, according to reports, may be an "international" style, which were sent to other countries (this makes sense because the movie was released after May 25 in countries other than the US). The posters without the release date (such as the example offered here) command somewhat higher prices than the "Coming May 25" posters. The artwork was designed by the renowned movie poster artist Drew Struzan , whose posters are very sought-after by collectors.

This example is unrestored and folded as originally issued in fine- condition with a small light fold near the three center cross-folds. As this example was never used, there are no pinholes, tears, stains, or other flaws. This is a guaranteed vintage original theater-issued "teaser" one-sheet poster and it is not one of the later bootleg fakes that were made see the two-page article in the accompanying photographs for more details about the originals vs. The values of the various Star Wars posters continue to climb and this recalled "teaser" one-sheet is among the most rare. The item "REVENGE OF THE JEDI (1982) Orig Recalled Undated International Teaser 1-Sheet" is in sale since Thursday, January 2, 2020.

This item is in the category "Entertainment Memorabilia\Movie Memorabilia\Posters\Originals-United States\1980-89". The seller is "silentcinema" and is located in Valley Village, California.