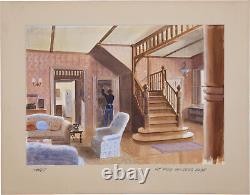 A young Anthony Hopkins plays a mentally disturbed magician who rises to fame when he begins utilizing a ventriloquist dummy. He rekindles a romance with a now-married ex-girlfriend Peggy Ann Snow (Ann-Margret), much to the chagrin of her hotheaded husband, his agent, and his surprisingly violent ventriloquist dummy.

Light adhesive residue on the top and bottom edges, else the illustration is Near Fine. Mat in Very Good condition, with light bumps and soil. Subject: 1970s Cinema, Edgar Award, Film Ephemera, Horror, Original Artwork. Royal Books is located in the midtown area of Baltimore, Maryland. Since 1996, we have specialized in rare books and paper relating to twentieth century literature, genre fiction, the arts, and popular culture, with a particular emphasis on cinema.

All books noted as First Editions are also First Printings unless indicated otherwise. This listing was created by Bibliopolis. This item is in the category "Entertainment Memorabilia\Movie Memorabilia\Other Movie Memorabilia". The seller is "royalbks" and is located in this country: US.