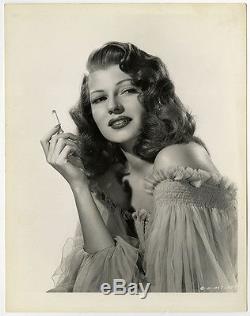 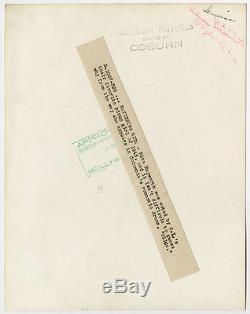 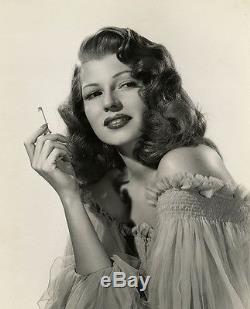 We are honored to be your one-stop, 5-star source for vintage pin up, pulp magazines, original illustration art, decorative collectibles and ephemera with a wide and always changing assortment of antique and vintage items from the Victorian, Art Nouveau, Art Deco; Mid-Century Modern eras. All items are 100% guaranteed to be original, vintage, and as described. ITEM: This is a vintage and original 1946 photograph of Rita Hayworth in costume from her career defining role as Gilda. A provocative smoking femme fatale view from Robert Coburn. Press snipe reads: RAVISHING RITA - Rita Hayworth was voted by G.

S their favorite pinup girl of 1945, and it isn't difficult to guess why from the way she appears in Columbia's romantic drama,'Gilda. " Measures 8" x 10 with margins on a glossy double weight paper stock.

Original paper caption, Coburn's ink stamp, and A. Approval ink stamp to verso. Please use the included images as a conditional guide.

Margarita Carmen Cansino was born on October 17, 1918, in Brooklyn, New York, into a family of dancers. Her father, Eduardo was a dancer as was his father before him. He emigrated from Spain in 1913. Rita's mother met Eduardo in 1916 and were married the following year. Rita, herself, studied as a dancer in order to follow in her family's footsteps.

She joined her family on stage when she was eight years old when her family was filmed in a movie called La Fiesta (1926). It was her first film appearance, albeit an uncredited one. Rita was seen dancing by a 20th Century Fox executive and was impressed enough to offer her a contract.

Rita's "second" debut was in the film Cruz Diablo (1934) at age 16. She continued to play small bit parts in several films under the name of "Rita Cansino" until she played the second female lead in Only Angels Have Wings (1939) when she played Judy McPherson.

By this time, she was at Columbia where she was getting top billing but it was the Warner Brothers film The Strawberry Blonde (1941) that seemed to set her apart from the rest of what she had previously done. This was the film that exuded the warmth and seductive vitality that was to make her famous. Her natural, raw beauty was showcased later that year in Blood and Sand (1941), filmed in Technicolor.

She was probably the second most popular actress after Betty Grable. In You'll Never Get Rich (1941) with Fred Astaire, was probably the film that moviegoers felt close to Rita. Her dancing, for which she had studied all her life, was astounding. After the hit Gilda (1946), her career was on the skids. Although she was still making movies, they never approached her earlier success. The drought began between The Lady from Shanghai (1947) and Champagne Safari (1954). Then after Salome (1953), she was not seen again until Pal Joey (1957). Part of the reasons for the downward spiral was television, but also Rita had been replaced by the new star at Columbia, Kim Novak. After a few, rather forgettable films in the 1960s, her career was essentially over. Her final film was The Wrath of God (1972).

Her career was really never the same after Gilda (1946). Her dancing had made the film and it had made her.

Perhaps Gene Ringgold said it best when he remarked, Rita Hayworth is not an actress of great depth. She was a dancer, a glamorous personality, and a sex symbol. These qualities are such that they can carry her no further professionally. Perhaps he was right but Hayworth fans would vehemently disagree with him. Rita, herself, said, "Every man I have known has fallen in love with Gilda and wakened with me".

By 1980, Rita was hit with Alzheimer's Disease. It ravaged her so, and she finally died at age 68 on May 14, 1987, in New York City. IMDb Mini Biography By: Denny Jackson Coburn was born June 23, 1900. For three decades, he was one of the most important portrait photographers in Hollywood from the 1930s to 60s. He was well known for photographing Joan Crawford, Carole Lombard, Hedy Lamarr, Henry Fonda, Joel McCrea, Lucille Ball, Marlon Brando, Montgomery Clift, Janet Leigh, Orson Welles, Ginger Rogers, Fred Astaire, Cary Grant, Katherine Hepburn, and Kim Novak. Rita Hayworth said he was her own favorite photographer and he took some of her best known photos including those for her most remembered film, Gilda. Beginning in 1940, he started working for Columbia for 20 years and is most associated with that studio for not only his portrait photography but also his set stills for many classic films. Some of the films he worked on include: "Vertigo", "The Birds, " "Our Town", "Algiers", and Cover Girl. He died on July 3, 1990 in Canoga Park, California.

He is buried in Los Angeles at the Forest Lawn Memorial Park Cemetery. Biography From: VintageMovieStarPhotos (dot) BlogSpot (dot) com. The item "Smoking Femme Fatale Rita Hayworth Vintage 1946 Robert Coburn Gilda Photograph" is in sale since Monday, April 25, 2016. This item is in the category "Entertainment Memorabilia\Movie Memorabilia\Photographs\1940-49\Black & White". The seller is "grapefruitmoongallery" and is located in Minneapolis, Minnesota.