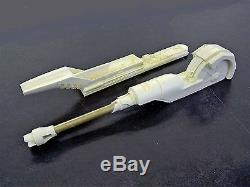 This item was acquired directly from a collection closely associated with Industrial Light and Magic. It has never been offered for sale before and is being offered here for the very first time. Included is a set of chin guns that were recently cast from an original, 1979 example. This pair of chin guns are the same size and weight of the guns used on the large pyro model of the Snow Walker in the 1980 film The Empire Strikes Back.

An original, 1979 urethane casting of one chin gun was used to create a silicon mold. That mold was then used to make a very limited number of chin guns that were offered to friends. The individual that made the recent castings is the same person that made the original chin guns for the movie when he worked for ILM.

Essentially, these are recent castings that were made by the original ILM employee that built the screen used versions for the movie. Made of urethane and various deco paint, these feature the look and feel exactly as seen in the film. They have a decent amount of weight to them and are almost 17 long. Very rare, original vintage ILM items never surface on the market making this piece highly sought after by intent collectors. Contact with any questions or for rare prototypes, samples and props from the Film and TV industries as well as companies such has Hasbro, Mattel, Kenner and more.

Check back every Tuesday for new listings. View our other auctions for different items here. The item "Star Wars Empire Strikes Back AT-AT Snow Walker Prop Chin Guns ILM Original Rare" is in sale since Thursday, June 09, 2016. This item is in the category "Entertainment Memorabilia\Movie Memorabilia\Props\Reproductions". The seller is "popculturerelicscom" and is located in Floral Park, New York.