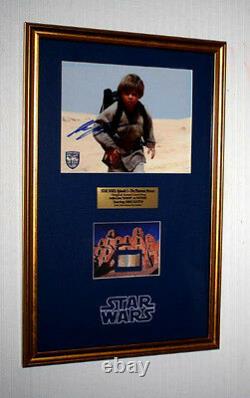 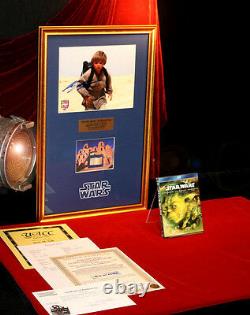 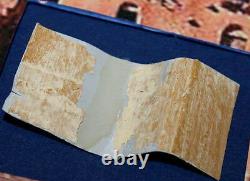 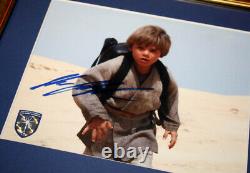 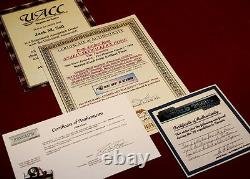 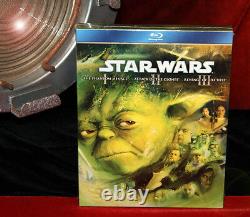 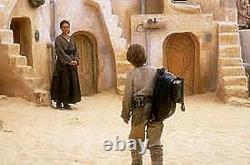 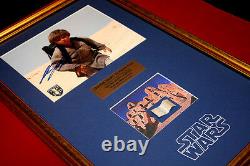 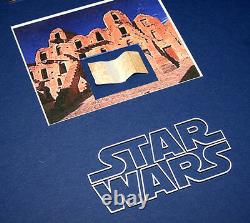 Check out our NEW Star Wars PROPS & COSTUMES from "The Rise of Skywalker" filmed at Pinewood Studios + genuine "DEATH STAR" pieces from "Star Wars IV" - a real "One of a Kind" Opportunity! STAR WARS: Episode I - The Phantom Menace. The 1999 Classic Motion Picture... Prop Piece Artifact from the Sets Built in "TATOOINE" - where Young ANAKIN SKYWALKER (Darth Vader) grew up on his home planet of TATOOINE aka Tunisia! This STAR WARS collection includes.

A Screen-Used Original Prop piece of the actual young "ANAKIN SKYWALKER's" House from the 4th GEORGE LUCAS film, "STAR WARS I: THE PHANTOM MENANCE" & 2 Original Certificate of Authenticity... This artifact was personally gathered in Tunisia. A DRAMATIC Movie DISPLAY that includes.

It was used as the exterior the Anakin Skywalker's home in many shots as well. Many scenes taking place in the city were shot in the middle of the desert in a region called Oung el Jemel and of course, TOZEUR. This very RARE PROP piece of the "TATOOINE" House, where ANAKIN SKYWALKER (Darth Vader) scenes were shot, was filmed on location in Tunisia... This is where the Artifact was cut from a larger prop piece that was used on-screen as a door frame in the famous STAR WARS motion picture..

The set is still in good condition and is composed of 15-20 buildings, though some are only facades. While there is absolutely nothing around the sets, some of the local people had actually set up residence in some of the buildings. This very RARE PROP piece of the "LARS FARM HOMESTEAD" Filmed on location in Tunisia was an Artifact cut from the large house that was used on-screen in the first famous STAR WARS motion picture... And it was personally dug up at the site from the original set in TOZEUR, TUNISIA in 1999 & 2010.

This piece was originally uncovered from the Tunisia sites in the 1999 expedition conducted by Jared Bond... And includes Jared's COA and an original CERTIFICATE OF AUTHENTICITY signed by D. Sell has been a D. Director of Film & Television for over 30 years & has loved the "Star Wars" movies as much as any fan! Any yes, it is VERY HOT in TUNISIA!

As a TV & Movie DIRECTOR and a lifetime member of the Director's Guild of America, D. ", "AEON FLUX, " "WARM BODIES, " "CASINO ROYALE, " "bruno, " "GONE WITH THE WIND, " "CHRONICLES OF RIDDICK, " "HANNIBAL, " "BATMAN, " "HOOK, " "WIZARD OF OZ, " "HUNT FOR RED OCTOBER, " "IT'S A WONDERFUL LIFE, " "SUPERMAN, " "GHOST, " "NATIONAL TREASURE, " "SKYFALL, " "SPIDER-MAN" & "PIRATES of the CARIBBEAN + dozens of other Films & Television shows, many destined to become Classics that will live on for millions of viewers for years to come. The FRAMED Exhibit is ready to display in your home, museum, office or media room.

Also included is this 8x10 color AUTOGRAPHED photograph of JAKE LLOYD, who appears as ANAKIN SKYWALKER (before he becomes "Darth Vader") and signed in Blue Marker by Lloyd. Skywalker is living in the Tatooine Desert with his single mother" on the exterior set of "Star Wars in Tunisia.. A Very RARE "STAR WARS" Display that includes this engraved Description PLAQUE.. This AUTOGRAPHED DISPLAY would make a Great Gift or Investment!

This RARE ARTIFACT is an actual prop piece of the "TATOOINE" HOUSE - where ANAKIN SKYWALKER (Darth Vader) grew up and used on-screen in the 1999 sci-fi classic, Star Wars: Episode I - The Phantom Menace. This particular piece appears to be made of fiberglass construction and painted...

And it was personally retrieved by Jared Bond in 1999 at the site from the original set in TUNISIA. You receive this very rare Original Piece of the ANAKIN SKYWALKER (Darth Vader) Home, mounted inside the custom shadowbox style FRAME with acrylite glass case, surrounded by acid-free blue matte and an autographed photo by JAKE LLOYD.. This screen-used prop Prop Artifact from Anakin Skywalker's House on measures approximately 1" x 1 1/2"... This is the actual prop piece you will receive. These "TATOOINE" Sets - where ANAKIN SKYWALKER (Darth Vader) lived was created by GEORGE LUCAS and Production Designer.

Worked together designing these prop houses that were used in creating the large filming exterior of the town of Tatooine.. This particular set PROP can be seen in the 1999 film, Star Wars: Episode 1-The Phantom Menace.

This piece was originally recovered from the doorway set in the Tunisia site in the 1999 expedition conducted by Jared Bond... And includes the original CERTIFICATE OF AUTHENTICITY from Jared Bond and another signed by D.

The ARTIFACT is professionally Displayed under Acrylite UV Glass in a Shadowbox style Framed Exhibit.... Just ready to hang on the wall of your Home, Office, Museum or Media Room.. You also get this Special Edition Brand New Factory Sealed (3 Disc) BLU RAY DVD boxed Set of the last 3 "STAR WARS" movies! "STAR WARS I: THE PHANTOM MENACE" "STAR WARS 11: ATTACK OF THE CLONES" "STAR WARS III: REVENGE OF THE SITH".

Tatooine is a fictional desert planet and setting for many key scenes in the Star Wars saga appearing in every Star Wars film except The Empire Strikes Back. Since it is the home planet of Anakin Skywalker and Luke Skywalker, as well as the meeting place for Obi-Wan Kenobi and Han Solo, it is one of the most iconic planets in the Star Wars universe. STAR WARS: Episode I-The Phantom Manace. The Phantom Menace opens as two Jedi Knights escape a hostile blockade. They find allies on Tatooine and come across a young 9 year old boy, Anakin Skywalker, who they believe may bring balance to the Force...

But the long dormant Sith resurface to reclaim their old glory. The Prop is part of the actual village of "TATOOINE" - where ANAKIN SKYWALKER (Darth Vader), grew up!

A great & famous Prop in "Star Wars" Motion Picture history! And you can own a piece of this film history, keep it as an investment and enjoy it for many years to come! STAR WARS: Episode 1-The Phantom Menace. This is an actual Prop piece of ANAKIN SKYWALKER's Home on "TATOOINE" - where ANAKIN SKYWALKER (Darth Vader) Sets were used on-screen in the 1999 sci-fi classic, Star Wars: Episode I-The Phantom Menace. A Very RARE "STAR WARS" Display..

The original Autographed Photo is matted inside the Frame with the engraved Plaque... This exterior shots were taken in the deserts of TUNISIA...

Most of the interior scenes were filmed in the studios. This "One of a Kind" DISPLAY is just ready to display in your Office, Home, Museum or Media Room. The fantastic genuine "ANAKIN SKYWALKER" (Darth Vader) Piece of Screen-Used Prop House came directly from the set in Tunisia and includes the original Certificate of Authenticity that guarantees this Screen-Used Prop original and genuine... The Prop cutting was made by D. SELL and includes his seal and signature on a 2nd COA.

You also receive an Original Certificate of Authenticity for the JAKE LlOYD Autograph from world renowed ICONOGRAPHS Autographs.. Both the Prop & Autograph are further guaranteed genuine by UACC Registered Dealer #228.

A GREAT DRAMATIC EXHIBIT from. "STAR WARS: Episode I-The Phantom Menace". All of our collections are professionally designed by Adrianne Richmond, Award-Winning Chicago-based Art Director & JACQUELINE ELLIOTT of HollywoodHomeDecor. Jake Lloyd as Anakin Skywalker, a nine-year-old slave boy and a skilled pilot who dreams of becoming a Jedi.

Hundreds of actors were tested before the producers settled on Lloyd, who Lucas considered met his requirements of "a good actor, enthusiastic and very energetic". Producer Rick McCallum said that Lloyd was smart, mischievous and loves anything mechanical, just like Anakin. Jake Matthew Lloyd (born March 5, 1989) is a former American actor who gained worldwide fame when he was chosen by George Lucas to play the young Anakin Skywalker in the 1999 film "Star Wars Episode I: The Phantom Menace, " the first film in the Star Wars prequel trilogy.

" Afterwards, he was cast as Jake Warren in "Unhook the Stars. " He got his big break playing Jamie Langston in "Jingle All The Way. " Afterwards he played Mark Armstrong in "Apollo 11. After portraying Anakin in a chain of related video games, Lloyd retired from acting citing bullying on the part of high school classmates and the stress of doing up to 60 interviews a day as his reasons for doing so. He left Hollywood for Chicago and attended Columbia College Chicago.

He continues to make appearances at sci-if and comic-book festivals. He currently lives in Indianapolis, Indiana. The original Prop "STAR WARS" Prop Piece, Frame, Autograph & factory sealed DVD set have been stored in an acid free case in a smoke free, pet free environment since being acquired in a temperature controlled storage room.

Our photos in this ad are also part of our ad description... This is the EXACT picture of the PROP you will receive. Check out our other auctions for more TV & Movie Collections that include wardrobes, props & autographs. Sell is a Registered Dealer with the U. We are proud that some of our memorabilia on display in the SMITHSONIAN, Washington, D.

Circus10: Fabulous costume, vintage RBBB. Belfast: Wonderful Ebayer & with genuine COA's too! JACK, GOT YOUR PACKAGE TODAY! I WAS VERY IMPRESSED AT THE WAY YOU PUT ALL THE PROPS TOGETHER. I PUT YOU IN ONE OF MY FAVORITES!

AND, THANKS TO THE OTHER 8000 GREAT EBAYERS WE'VE HAD THE HONOR OF WORKING WITH FOR OVER A DECADE... WE LOOK FORWARD TO MEETING MANY MORE GREAT EBAYERS IN THE FUTURE FROM ALL OVER THE WORLD! RARE "Star Wars" Movie PROP Collection that includes an Original Screen-Used PROP piece of the ANAKIN SKYWALKER HOME (Darth Vader on "TATOOINE"), built and used on the Set in TUNISIA for the George Lucas 4th Star Wars film "STAR WARS: THE PHANTOM MENACE, " an 8x10 color photo autographed by the famous "Star Wars" Actor JAKE LlOYD, 3 original COA's, a large SHADOWBOX style DISPLAY FRAME with engraved plaque and STAR WARS Logo, original factory sealed Blu Ray 3 DVD boxed "STAR WARS" set (NTSC, Region One), all guaranteed genuine by DGA Film Director JACK M. The original CERTIFICATE OF AUTHENTICITY (COA) signed by Jared Bond (1999 Tunisia Expedition) guarantees this Screen-Used Prop original and genuine... SELL and includes his seal, signature and 2nd COA + an Original Certificate of Authenticity for the JAKE LlOYD Autograph from world renowed ICONOGRAPHS Autographs...

This professionally made shadowbox style Frame with acrylite Glass makes for a very dramatic display, all ready to display in your Home, Office, Museum or Media Room... A GREAT piece of STAR WARS MOTION PICTURE history.... A real "One of a Kind" Find & Conversation Piece! Movie & Television Props & Autographs can make for a good investment as well! Check out our other auctions for more great movie & television PROPS, AUTOGRAPHS COSTUMES!

Imagine giving this ULTIMATE great STAR WARS Movie PROP & AUTOGRAPH collection to the Star Wars Fan in your life or just keeping it for yourself! WE ALSO OFFER A 3 MONTH LAYAWAY PLAN WHERE YOU CAN MAKE 3 EQUAL MONTHLY PAYMENTS TO US & WE DON'T CHARGE ANY INTEREST....

A GREAT MOTION PICTURE COLLECTION from a great classic film, STAR WARS: Episode I - THE PHANTOM MENACE. VERY RARE & VALUABLE ONE OF A KIND PROP & AUTOGRAPH!! It's very hard to find the real Props from this great movie... This would look great displayed in your home, museum or office for years to come! The item "STAR WARS Prop TATOOINE LUKE HOME, Signed JAKE LLOYD, Blu Ray DVD, COA, UACC" is in sale since Saturday, April 13, 2019.