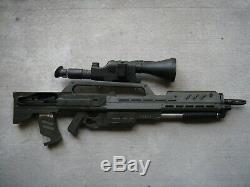 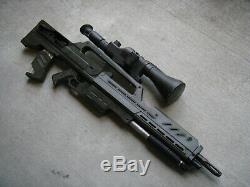 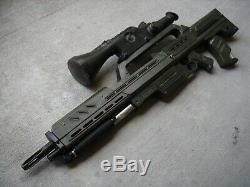 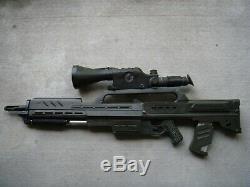 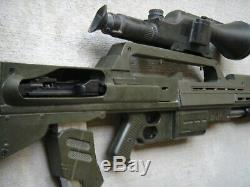 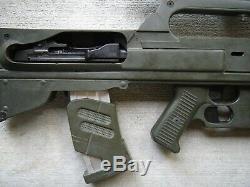 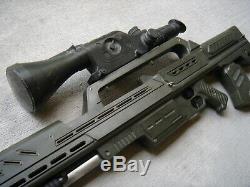 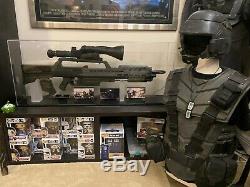 This is THE Hero screen-used Sniper rifle used by Seth Gilliam as Sugar Watkins. This prop holds a special place in my collection, as it had been my "Holy Grail" prop I have been searching for since I began collecting. In April 2006, I finally acquired it, and it has been in my private collection ever since.

This hero live-fire Morita rifle is casing #28, and is fitted with the original sniper scope! The Morita originally contained a fully-automatic Ruger AC556 machine gun and Ithaca shotgun. There were only three Sniper rifles produced for the movie. This was the ONLY one to use a real shotgun and fully automatic machine gun combo: the other two had fake shotguns and semi-automatic Ruger mini 14's.

Although the real firearms have been removed, the Sniper rifle still has the original working shotgun and machine gun triggers, as well as the internal barrel extension and mounting brackets. (the rifle IS fitted with the correct replica airsoft shotgun AND a Tanaka Works Ruger mini 14 gas blowback rifle). This actual Sniper rifle was retained after production by the movie's armorer Robert "Rock" Galotti, and was placed in his private collection ever since the movie wrapped. He retained the rifle as it was the best of the three and somewhat'special'. I acquired the Sniper rifle directly from Mr. The prop is accompanied by a signed letter from Mr. Galotti explaining the weapon's use in the movie and its full history. The rifle itself can be easily screen matched by several small marks, including the fiberglass mold "bubble" at the front above the air vents, and also the chip at the very front of the rifle (above the shotgun pump). You can see this on the rifle Sugar Watkins is seen attending to when Rico and his friends join the Roughnecks (right before Birdie punches Ace). There are also still traces of the green Bug blood around the lens of the Sniper scope from the scene where Sugar obliterates a dead bug at point blank range, getting covered in the green goo as a result.

This is indeed an extremely rare and very special piece from the movie. The display case shown will be included for free. Starship Troopers items are becoming very hard to find these days and are extremely desirable. Don't hesitate and let this opportunity pass you by! Armor & helmet shown in the final photo are not included.

PLEASE NOTE: this is a static movie prop and no longer a live firearm. Neither the replica Ruger mini 14 rifle or airsoft shotgun are capable of firing projectiles. The item "Starship Troopers Screen Used Hero Live Fire Sniper Morita rifle movie prop" is in sale since Sunday, October 20, 2019.

This item is in the category "Entertainment Memorabilia\Movie Memorabilia\Props\Originals". The seller is "trader806" and is located in Windermere, Florida.