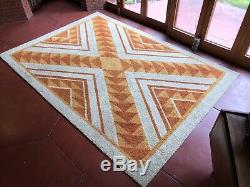 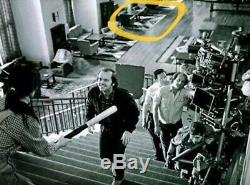 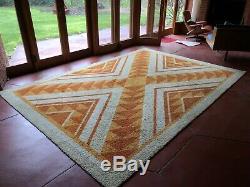 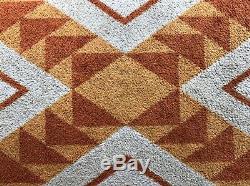 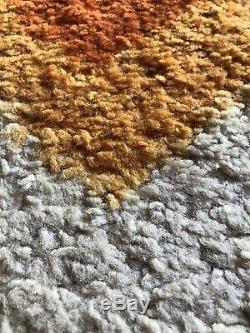 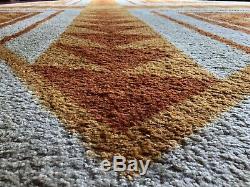 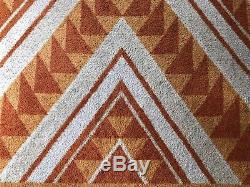 This is your once-in-a-lifetime chance to own an actual carpet used in the Colorado Room of the Overlook Hotel in Stanley Kubrick's The Shining. This is not a reproduction.

This is one of the two matching Native American-style carpets with orange and white lozenges that are seen in the Colorado Lounge throughout the film, including during the iconic bat fight scene. The 139.8 x 98.4 in. On the Shining 2:37 podcast, Kubricks daughter Katharina explains how her father sent her to an art gallery in Scottsdale, Arizona to source Native American rugs for The Shining.

When those proved too costly, Kubrick had similar ones custom-made. This would put the rugs likely manufacture at 1978.

D'alessandro describes his acquisition of the rug in his memoir, Stanley Kubrick and Me: Thirty Years at His Side: I bought two carpets from the Colorado Lounge at 75 pounds 27 pence each for my house in Farm Road: one for the dining room and one for the living room. Stanley kept the long table where Jack Nicholson had typed his novel. Written on the back of the rug is "R[eserved] for Emilio, " E. In addition to giving you ultimate bragging rights among The Shinings notoriously rabid fans, this is an excellent investment, as Shining props continue to sell at record-smashing prices. The Shining is one of the most celebrated movies of all-time, and continues to be regularly shown in art-house theaters across the world.

Interest in the film is only growing with the October release of a 4K restoration and the November release of a much-anticipated sequel, Dr. A reproduction of this rug appears in the Colorado Lounge in Dr. The films iconic carpeting is a particular point of obsession, as the hallway carpet pattern has been referenced in movies and TV shows, and reproduced for neckties, sweaters, hats, keychains, mousepads, and on and on. In general, interest in Stanley Kubrick memorabilia is at an all-time high: a traveling Kubrick exhibit has shown in 16 countries and counting, and a 2001: A Space Odyssey exhibit is coming to New Yorks Museum of the Moving Image in January. Dont miss this chance to own a piece of cinema history, forever and ever and ever...

The item "THE SHINING original prop Carpet from The Overlook Hotels Colorado Lounge" is in sale since Friday, November 1, 2019. This item is in the category "Entertainment Memorabilia\Movie Memorabilia\Props\Originals". The seller is "seasofcheese" and is located in New York, New York.