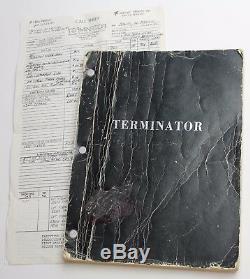 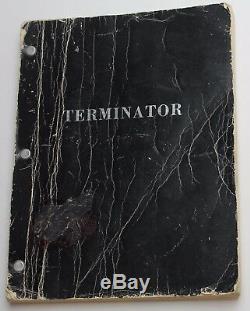 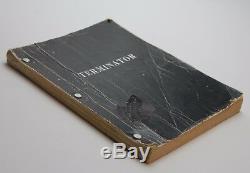 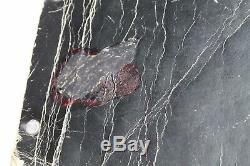 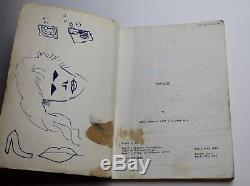 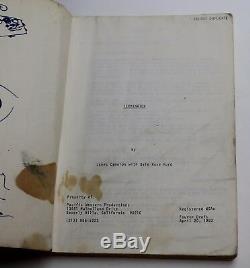 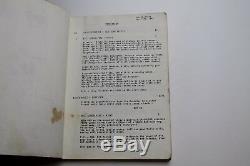 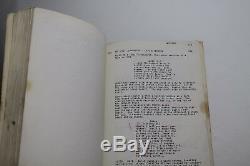 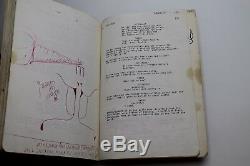 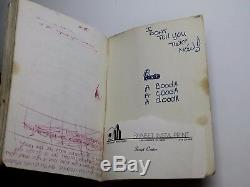 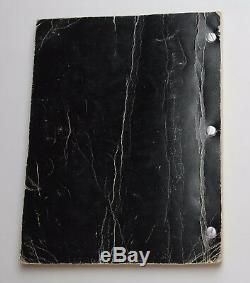 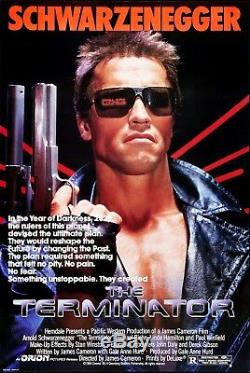 This is an Original Movie Script from the 1984 Action Sc-Fi Movie, The Terminator. It has the original black production cover which has a lot of creasing. It appears that some sort of substance was stuck to the front cover at one time. At first glance I thought this substance may have been a type of fake blood used during production and somehow a bit of that substance was wiped onto the front cover.

There is still some red colored residue on the front cover. It has all white pages inside and it is 129 pages long. The writing inside seems to be unrelated to the movie, there is some writing that looks to be a message for recording to a personal answering machine, for the Cervantes Residence.

I think the person may have wrote it down on paper so they would know what to say when they speak it onto the message machine. This script was probably used by an uncredited makeup artist or production assistant and most of the drawings and writing inside seem to have been done just to kill time. This script also includes 1 Call Sheet. Please view all of the pictures provided above.

It is in good overall condition. A cyborg is sent from the future on a deadly mission. He has to kill Sarah Connor, a young woman whose life will have a great significance in years to come. Sarah has only one protector - Kyle Reese - also sent from the future.

The Terminator uses his exceptional intelligence and strength to find Sarah, but is there any way to stop the seemingly indestructible cyborg? POSTER IS NOT INCLUDED, IT IS JUST BEING USED AS A VISUAL REFERENCE.

These two types of scripts are much less valuable and desirable. All of our scripts are Original. An original movie script has a lot of character in the item itself and every one of them is different in some way or another.

There is usually only one script given to each crew member during production, however, sometimes they do get more than one. This makes original movie scripts very desirable because of how scarce they are. Any changes made to the screenplay during production are known as revisions and these revision pages are inserted into that one script that was issued out to them. For example, if we are talking about a low-budget film with a small cast and only a few crew members, there are actually only a small number of scripts in existence around the world for that film. This aspect of collecting makes it fun but also difficult because there may be a certain writer or director that you love to collect and there may only be a handful of movie scripts that still exist from that specific film that you are looking for. We have some of the rarest movie scripts in the world. Each film project has a different total number of scripts that are issued. The older a film is you also have to figure in the fact that a lot of the original movie scripts have been thrown out or destroyed over time. We do our best to provide the widest selection of original movie scripts in the world. Whatever actor, producer, director, writer or specific film department you are looking for, we probably have a movie script related to the person you are looking for in some form or fashion. I know that there are a lot of items to search through, but there is definitely something for you. Once you check off this little box it will allow you to search for a specific word that is contained in any of our listings' actual description. Here all of the original movie scripts will be categorized by decade, which will help you to narrow down what you are looking for by the year it was made. The item "THE TERMINATOR / James Cameron 1983 Original Movie Script, Arnold Schwarzenegger" is in sale since Saturday, April 13, 2019.

This item is in the category "Entertainment Memorabilia\Movie Memorabilia\Scripts\Originals\Unsigned". The seller is "themoviewizard" and is located in Van Nuys, California. This item can be shipped to United States.